The veteran B.C. centre was one of nine Lions to earn top honours heading into Sunday's West Division final against the Edmonton Eskimos.

"At this stage in the career, I stopped hoping for things like that, but it's nice to get it," said a drenched Reid after the Lions practised in heavy rain. "I gave up getting disappointed in the years when I didn't get it. I just realized my job is to get my job done. But this kind of caught me off guard and caught me as a surprise. After 11 years of hard work, I'll say I feel proud of myself."

Reid, Richmond, B.C., native, helped the Lions record lowest quarterback sacks allowed total in the CFL at 29, while overcoming a 0-5 start to finish first in the division. The 35-year-old praised his fellow members of the offensive line, which has been remade in the past couple of seasons.

Reid said it was nice to have the all-star voters, which included fans, reporters and head coaches, validate his role as team leader after he had to battle to keep his job last season. Head coach and general manager Wally Buono decided to go with younger and bigger Dean Valli as the starting centre and made Reid a backup. After Valli went down with an injury, Reid resumed his starting role and has kept it ever since. Valli has since returned to his offensive guard spot.

"That says something right there," said Reid, who stands six-foot-one and weighs 305 pounds. "My whole career, I've been fighting an uphill battle of not being big enough, of being an undersized guy. A lot of people thought that I should move on, but I think my greatest accomplishment has been my staying power, my ability to do what has to be done to keep earning my job and keep helping this team win and be an asset that can help move this team forward in spite of a lot of criticism and odds that I've faced over the years. That's where I take my pride from."

Buono said the plan to move Reid into a backup role had merit because Reid was coming off major foot surgery. Noting Reid's physical condition is much better than it was two years ago, Buono said Reid has been a "good soldier" at a position which inevitably will require a younger player.

While Buono said Olafioye was duly recognized for being the best tackle in the league, he would not say Reid was the best at his position, saying centres get recognition because they have to call line plays.

But Banks offered an opposing view, contending Reid is the best CFL centre he has seen.

"You can't replace a gift," said Banks, explaining why Reid retained his position. "He has a gift of knowing football, he's aggressive, he knows how to use his health. I mean, he has the total package for a lineman."

Banks said many people don't realize the important role a centre plays. He must make all the line calls, complete all checks, read the defensive and talk to the quarterback, running backs and receivers — all in 20 seconds before snapping the ball.

Reid, the second-youngest of six children, gets his fiery nature from an Irish-Canadian mother and English-born father and attributes his staying power to hard work developed in his youth.

"A lot of this is about attrition," said Reid. "Bodies can't hang on long enough, and I've found ways to keep my body strong. I've put up with a lot of pain, and I just want to keep playing."

While greatly humbled, Lulay said he has been too busy preparing for the Eskimos to think the honour. He attributed much of his success to his receivers and offensive linemen, especially Reid.

"We've gotta communicate some protection stuff, and his recognition is awesome," said Lulay. "He's got such good experience. He doesn't panic. He knows how to get us in and out of certain protections, and he's doing it as he walks to the line of scrimmage. Before the defence even completely lines up, he's got an idea about what they're doing."

Reid said that, of the quarterbacks to whom he has snapped the ball — including Damon Allen, Dave Dickenson, Casey Printers and Buck Pierce — none work harder on preparation than Lulay.

While Lulay will likely be considered for more awards in the future, Reid knows that his first all-star selection could also be his last. The centre said he and Buono are taking his status one year at a time.

"Where I go beyond this year, I don't know," said Reid. "I'm taking things year at a time now. I want to get this Grey Cup win. It starts by getting a win this Sunday." 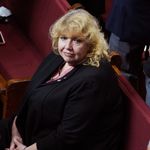