TORONTO - Inconsistent labour and safety standards are endangering those toiling behind the scenes as performers put on increasingly ambitious shows, an industry expert said a day after a deadly stage collapse in Toronto.

Part of the massive outdoor structure came crashing down Saturday afternoon during setup for a Radiohead concert, killing a British drum technician and injuring three other workers.

As Ontario labour officials combed through the wreckage Sunday, one expert said pressure to produce flashy performances on short deadlines may play a role in what appears to be a "recurring problem" of dangerous stage collapses in recent years.

Adding to the problem is a lack of clear government or industry guidelines when it comes to safety precautions and procedures, she said.

"In some cases, it is not clear who's going to say, 'That's not OK,' or 'That doesn't meet the standard'," said Janet Sellery, a safety consultant specializing in the arts who is based in Stratford, Ont.

"I think there's a lot of performances and events that may go on with a lot of fingers crossed," she added.

Inspectors with Ontario's Ministry of Labour were examining the Downsview Park venue Sunday, trying to determine what caused the stage to suddenly crumple just before the gates opened.

The falling debris crushed Scott Johnson, a drum technician in his 30s, whom the band called "a highly skilled and valued member" of its road crew.

In a statement posted on their website Sunday, Radiohead said they were "shattered" by Johnson's death.

"He was a lovely man, always positive, supportive and funny," the message read. "We will miss him very much. Our thoughts and love are with Scott's family and all those close to him."

The sold-out show was cancelled before it even began, forcing ticketholders — many of them from out of town — to turn back.

A ministry spokesman said the investigation into the incident is "fairly complex" and it could take some time to figure out exactly what happened.

Investigators are looking to see whether safety regulations and standards were followed and staff were properly trained, Matt Blajer said.

But Sellery, who sits on a committee advising the province on safety standards for the entertainment industry, said the regulations don't necessarily address the challenges involved in putting on a show.

"Because of the unique situations that the live performance and event industry involves, it's not clear to a lot of people how to implement them (regulations)," she said.

"So even though people want to be compliant, you read something and it's clearly written about a construction site," which can be confusing, she said.

Even more challenging is the slow process for updating standards so they keep up with a rapidly evolving industry, she said.

"It's not something that there's a lot of political or bureaucratic energy behind," she said.

"Doing live performance and events has always been about pushing boundaries and I think that's a good thing, but you have to make sure... that the health and safety practices keep up with that."

There've been a number of stage collapses in recent years.

Six people died last August when the stage fell at a concert in Indianapolis and five died when a storm toppled a stage at a festival in Belgium.

In Canada, several people were hurt when the stage went down at Bluesfest in Ottawa last July and one person died in 2009 when a windstorm collapsed the stage at the Big Valley Jamboree in Alberta. 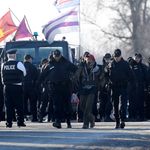 Watch Live Footage From Tyendinaga As Police Move In On Blockade