The world's longest covered bridge is marking it's 111th anniversary and, much to the surprise of Hartland's mayor, a doodle of the bridge was being used Wednesday as the search page icon on Google.ca.

Craig Melanson said he only learned of the doodle after people started calling him to say they saw it on the Internet.

"It's wonderful. I think it's a great honour for Hartland to have this happen," Melanson said.

"It's the kind of advertisement that money can't buy."

Every year, thousands of people visit the small town near the Canada-United States border in western New Brunswick to take pictures of the bridge or to walk or drive across the span.

"It's good not only for Hartland, but it's good for the whole tourism trade," Melanson said.

Google spokesman Aaron Brindle said the company looks for iconic things, places and people to feature with the doodle.

"We've done a Les Paul guitar tribute where you could play music, we've done Big Bird, and I think we've done about a thousand doodles around the world so far," Brindle said from his office in Toronto.

On Canada Day, Google.ca featured a doodle of a beaver wearing a crown and holding the Canadian flag.

"Every once in a while when you go to that page you're going to get something that surprises, inspires or just adds that touch of whimsy to your day," he said.

Construction of the wooden bridge began in 1898.

Until then, crossing the river meant using ferries in the summer, ice roads in the winter or travelling up or down river to use other bridges. Bad roads meant a long and difficult journey.

So a local group sold bonds and raised the money to build the original uncovered bridge, which cost $29,421.

The decision was later made to cover the bridge to protect it from the weather.

The Olympic torch was carried through the bridge in 1987. It has been featured on many postcards and in 1995 Canada Post issued a stamp to honour the bridge.

"People in Hartland know all about this bridge, and in New Brunswick they know about the longest covered bridge in the world, but I suspect a lot of Canadians don't even know that Canada is home to this wonderful, old bridge that is kind of majestic and celebrating its 111th birthday," Brindle said.

There are 3.7 billion searches on Google per month in Canada, and Melanson said he hopes the traffic on the site leads to some added traffic in his town.

"I hope that they'll investigate it further and at some time perhaps their curiosity might bring them to this part of the province," Melanson said.

The doodle was drawn by Mike Dunn at Google's headquarters in Mountain View, Calif., and Brindle said the work has inspired Dunn to want to travel to New Brunswick.

"After working on it, he says that he'd like to cross the bridge." 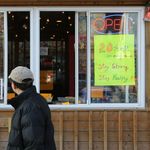