OTTAWA - Salma Ataullahjan was just another international well-wisher paying a visit to injured Pakistani activist Malala Yousafzai in Britain — that is, until the Canadian senator began to speak in the family's native tongue.

Yousafzai's father was taken aback when he discovered that not only is Ataullahjan from Pakistan, but also from the very same town in the Swat district, and conversant in Pashto, one of the region's dominant languages.

The senator spent 90 minutes chatting with mother Toorpekai and father Ziauddin Yousafzai in a private room at the Queen Elizabeth Hospital in Birmingham on Wednesday.

Ataullahjan was unable to see 14-year-old Malala, who is recovering from being shot twice by Taliban assailants as she rode a school bus in early October.

Ziauddin Yousafzai, a poet and schoolteacher, told Ataullahjan he knew the senator's family.

"They were so surprised," Ataullahjan told The Canadian Press in a telephone interview.

Ataullahjan had been speaking at a World Health Organization conference in Geneva, and made the personal decision to take a detour to Birmingham. She made the arrangements to meet with the Yousafzais through the Pakistan embassy.

Ataullahjan has two adult daughters in Canada who are also taken with Malala's story. One of her daughters wrote a poem in tribute to the young activist, which Ataullahjan recently read on the Senate floor.

"It's very emotional because I've always spoken to my children about our heritage, and how they should be proud of what they are... I gave that to him and he loved it," Ataullahjan said.

"He said he was going to take it into Malala. It was very emotional as a mother for me to just sit with them because I have two girls also."

The former Toronto realtor said the family mentioned all the letters that had poured in from Canada, and said Malala has seen each one.

Malala has been an outspoken proponent of the right to education for girls in Pakistan. She began blogging under an alias for the BBC three years ago about life living under the thumb of the Taliban, but eventually became more public about human rights.

Ataullahjan said her parents are pleased with her recovery. The senator told them she would do everything in her power to make sure Malala fulfilled her dream of becoming a lawyer.

"People have been going, but at some level we connected," Ataullahjan said of the visit.

"I said I have daughters, we exchanged personal numbers, he gave me his email, we did all that. I said look, if there's anything I can do, if you need help with something, just call me." 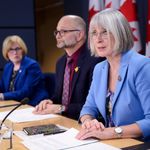