SEATTLE - Red Bryant remembers the early years of his career, when the Seattle Seahawks struggled to win only four and five games in his first two seasons.

Getting a 10th win on Sunday night and a trip to the post-season was special to the Seahawks' big defensive end.

"Who has been playing better than us the last few weeks?" Bryant questioned. "This is the National Football League and you don't get any gimmies. We work hard to win. ... It's hard to win in this league."

Richard Sherman returned Bryant's blocked field goal 90 yards for another touchdown as the Seahawks (10-5) jumped to a 21-0 lead. That only added to an already hyped crowd on a typically cold and rainy December night, with noise echoing off the walls and overhanging roof of CenturyLink Field that might have been heard all the way across Puget Sound.

No one appeared to care about the weather, not with the performance they were seeing on the field. And not with a ticket to the post-season guaranteed thanks to Seattle's first 10-win season since 2007.

"We knew we were capable of doing this. We had no doubt. Even in Week 1, we knew that we had the talent to do what we're doing now," said wide receiver Doug Baldwin, who had two touchdown receptions. "It took time because we're a young team. We had to mature. We had to grow together, build that chemistry, build that trust out there on the field. That's the most important thing."

Seattle surged into the playoffs on the strength of its sixth win in seven games, putting up dizzying offensive numbers that no one thought would continue against the top scoring defence in the NFL but did.

Seattle has outscored its last three opponents 150-30. The 42 points were the most allowed since Jim Harbaugh took over the 49ers, and the most San Francisco yielded since giving up 45 to Atlanta in 2009. It was the perfect way for Seattle coach Pete Carroll to snap a three-game losing streak against his rival.

"We just try to play really good football and see what happens at the end," Carroll said. "We have been scoring and doing a nice job of it and it would be great If we can keep it rolling."

Seattle will likely be the No. 5 seed in the NFC. There remains a slight chance of winning the NFC West, if the Seahawks beat St. Louis in the season finale and Arizona can upset the 49ers in San Francisco.

The Seahawks, 7-0 at home, delayed San Francisco (10-4-1) from celebrating a division title. They turned Harbaugh's 49th birthday into a miserable evening.

"If you had told me this would be the outcome I wouldn't have believed it," Sherman said. "I would say you're making this up."

Wilson hit Lynch on a 9-yard TD in the first quarter, Anthony McCoy for a 6-yarder late in the first half, and Doug Baldwin on 4 and 6 yard TDs in the second half.

Wilson has 25 TD passes, one behind Peyton Manning's NFL rookie record of 26. He finished 15 of 21 for 171 yards. His only incompletion in the first half was a deflected pass that Patrick Willis intercepted.

Wilson's counterpart, San Francisco's Colin Kaepernick, had already proven himself capable of winning on the road with victories in New Orleans and last week in New England. But Seattle is a different beast, widely regarded by players as the loudest venue in the NFL. His inexperience playing in such an environment showed. He was flustered and disorganized at the line of scrimmage, letting the noise from Seattle's fans affect him.

Kaepernick's forgettable night was capped when Sherman stepped in front of his pass intended for Randy Moss at the back of the end zone on the first play of the fourth quarter for his seventh interception of the season.

"Every time you are on the field you are learning something," Kaepernick said. "We just have to take what we can from this game and move on to next week."

San Francisco played without defensive tackle Justin Smith due to an elbow injury that ended a streak of 185 starts. The 49ers lost tight end Vernon Davis in the first quarter with a concussion sustained when he was knocked off his feet on a huge hit along the sideline from Seattle safety Kam Chancellor that looked legal but drew a penalty for hitting a defenceless receiver.

San Francisco wide receiver Mario Manningham went down with a left leg injury early in the third quarter when he was tackled low by Leroy Hill and fumbled.

The loss of Smith affected the entire defence. Aldon Smith was left stuck on 19 1-2 sacks after being locked up by Seattle offensive tackle Russell Okung. 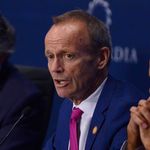