Canada Edition CLOSE
Follow us
Terms | Privacy Policy
Part of HuffPost News
TORONTO - A Toronto woman thought she had won a tidy $40,000 Lotto Max prize, but after her daughter checked on the Internet she discovered it was really $40 million.

Maria Carreiro was quite animated as she described how she checked the ticket the first time at the local store Saturday morning, thinking she had won just a fraction of the April 5 draw.

Her daughter later checked the OLG website and said "Mommy, you're $40 million richer."

"So I ran down the street like a crazy woman and checked the lottery ticket and it said $40 million and then I go 'Oh my God.' I ran back up the street, home, and then I go 'I need a glass of water.'"

The 51-year-old grandmother and her daughter were still jumping up and down with excitement as they picked up her cheque Monday at the Ontario Lottery and Gaming office in Toronto.

Carreiro said that among other things, after 30 years of marriage she is finally going on a Hawaiian honeymoon.

And she was taking all of her family out for dinner.

She stayed at home to raise her family, but had previously spent many years doing factory work.

Those days are over, and her husband of 30 years won't be working anymore either.

"He told his boss Saturday 'Oh I'm going to work with you Monday after that? I quit,'" she recalled him as saying.

Carreiro said she now has enough money to buy things she couldn't afford before, like a new house. 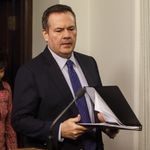