Canada Edition CLOSE
Follow us
Terms | Privacy Policy
Part of HuffPost News
OTTAWA - Canada's chief elections investigator pushed hard against moving his operations out of the same building as Elections Canada, fearing it would interfere with his ability to investigate electoral wrongdoing and could taint evidence needed to prosecute offenders.

Yves Cote, the commissioner of elections, had already lost the battle last spring over Conservative legislation that severed his operations from Elections Canada — a move the government sold as providing him greater independence and freedom from bias.

Documents obtained under the Access to Information Act show Cote was fighting a losing battle over real estate as well.

Cote feared a move to a separate building — rather than to an empty floor in the same government building that housed Elections Canada — would have a negative impact on "operational readiness, efficiency, cost, timing and security."

Nonetheless, last month the commissioner and his two dozen investigative staff were moved a few blocks away from Elections Canada in Gatineau, Que. — at a cost of almost $3 million.

The move was compelled by the passage last June of the controversial Fair Elections Act, a sweeping overhaul of election laws which, among other things, split Cote's investigative shop from Elections Canada and placed it under the Director of Public Prosecutions.

The Harper government maintained the split would insulate investigations from what it considers a biased electoral watchdog, despite the insistence of experts, including Cote, that Elections Canada never interfered in probes of wrongdoing.

Once the organizational split was confirmed, Cote raised practical concerns about keeping the disruption to a minimum.

In a June 6 email, Cote noted his office would continue to have "a great deal of contact" — often daily, during elections — with Elections Canada, which administers election laws and alerts investigators to complaints or suspicion of wrongdoing.

When issues arise, "it is crucial to be able to address them as promptly as possible," Cote wrote to officials in the public prosecutor's office who were planning the move.

"In such circumstances, the stakes can be high. In order to maintain the public confidence in the electoral process, there must be as few hindrances and obstacles as possible. From that point of view, my considered opinion is that being housed in the same building as EC would definitely be a step in the right direction."

Cote said his office receives "a very large number" of referrals from Elections Canada each year and moving to a separate building could jeopardize the security of files, often containing "sensitive information," that would have to be transferred between buildings.

"In addition, it adds to the costs and slows down the operations."

Moreover, Cote said his office uses specialized computer software developed specifically for Elections Canada which is housed on the agency's servers. It would be "very complicated," he wrote — underlining 'very' — to change that system and "could have serious operational consequences ... (and) could be quite expensive."

The move was to have been completed by Oct. 1, 2014, although it was apparent last June, even before the Fair Elections Act was given royal assent, that the deadline was unrealistic. Cote was adamant the move had to occur by April 1, 2015, if his office was to be up and running for a federal election scheduled for October.

It appeared the fastest move would be to an empty floor in the same building that houses Elections Canada — the option Cote favoured and which was supported by officials in the public prosecutor's office. However, the documents show that officials expected "push back" from "the centre" — bureaucrat-speak for the Prime Minister's Office and its bureaucratic arm, the Privy Council Office.

"We need to report to the centre on this ASAP," an official in the public prosecutor's office wrote at one point.

The documents, which contained some blacked-out passages, suggest the final decision was eventually made by Public Works, which concluded that a move to a separate location could be accomplished faster than a move within the same building.

"Good to have certainty about place and timing," he wrote in a July 16 email to public prosecutor Brian Saunders.

The move was completed Feb. 16.

Photo gallery How Much Are Federal Politicians Making? See Gallery 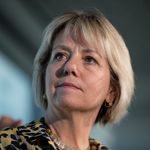