Nearly all of the sectors on the TSX closed lower, with the sole exception being the telecom segment, which gained slightly less than one per cent.

South of the border, the Dow Jones industrial average was also in correction territory, losing a whopping 530.94 points to 16,459.75 - a decline of more than 10 per cent from its record high in May.

The latest sell-off has largely been a reaction to growing evidence of a slowdown in China's economy, including Friday's release of the Caixin purchasing managers' index, which fell to an unexpectedly low 47.1 points. Anything below 50 indicates contraction.

That prompted another steep sell-off on the Shanghai composite index, which closed down 4.3 per cent, while Hong Kong's Hang Seng fell 1.5 per cent.

"Global stocks are now heading for their worst week of the year and that really follows from Chinese factory activity," said Giles Marshall, portfolio manager at Fiduciary Trust Canada.

"Concern over global growth really is the key story. The consensus expectations were for much stronger growth in the second half of this year and those expectations are now being challenged."

However, Marshall said he doesn't recommend taking "precipitous action," noting that clients with balanced portfolios that have a fixed income component would see their losses minimized.

"Bond markets have really held up pretty well," said Marshall. "The equity component may be down three or four per cent, depending on which markets you're in, but the bond market component ...is going to be up on the week."

He added that the last time North American markets reached correction territory was late summer of 2011.

"In many ways we are due," Marshall said. "It's been four years since the last 10 per cent correction. We almost had one in September and October of last year, but the market bounced again just before it reached 10 per cent levels."

In economic news, Canada's annual inflation rate rose to 1.3 per cent in July, its highest level so far this year.

On commodity markets, the benchmark oil price briefly dipped below US$40 a barrel around midday before recovering some of those losses. The October crude contract closed down 87 cents at US$40.45.

'Infuriating' That Nobody Charged In RCMP Shooting Of Rodney Levi: Chief

'Who Is A Health-Care Worker?': The Big Question We Must Ask In Vaccine Planning 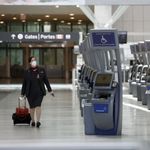 Travel To Canada Behind Recent Uptick Of Coronavirus Infections: Data