The Canadian Embassy in Kabul confirmed Monday that the guards were on their way there when the bombing happened, but said there had been no attack on its embassy premises.

"Today's attack on security workers in Kabul is appalling and cowardly," Trudeau tweeted. "Our thoughts are with the victims as we stand with the Afghan people."

"Many of the victims have been part of our embassy family for years, and they will be remembered for their service in the protection of the men and women at the Embassy of Canada to Afghanistan," Dion said in a statement. "Canada stands with the people of Afghanistan in their struggle against terrorism in all its forms."

The Associated Press reported from Afghanistan that there were conflicting claims of responsibility for the attack, and that they could not immediately be reconciled.

In Nepal, foreign affairs spokesman Bharat Raj Paudyal, said the Nepalese government is aware of the incident and is trying to verify the names of the victims. Nepal doesn't have an embassy in Afghanistan, but the embassy in Islamabad, Pakistan, is working to get the details, he said.

The attack was the latest to hit Kabul as the Taliban have stepped up their assaults as part of their summer offensive.

Afghanistan's chief executive officer, Abdullah Abdullah, condemned the attack on Twitter, saying: "This attack is an act of terror and intimidation."

Elsewhere in Afghanistan, a bomb rigged to a motorbike killed 10 civilians and wounded 40 others during morning rush hour in a busy market in a province in the northeast.  And later Monday in Kabul, a second Taliban bombing killed a civilian and wounded five people, including a provincial council member who was the intended target of that attack, authorities said.

In a statement from the presidential palace in Afghan President Asharf Ghani condemned all three attacks.

It quoted Ghani as saying that "terrorists do not hesitate to kill people even during the holy month of Ramadan" and that they are seeking to "create fear among the people."

--With files from The Associated Press 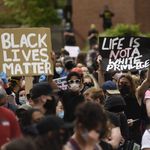