RED DEER, Alta. — United Conservative Leader Jason Kenney, in a fiery speech to party members, is promising an all-out attack on the "green left" and those who secretly fund and support the demonization of Alberta's oil.

"The special interests have targeted Alberta oil and not Saudi, Venezuelan, or Russian oil because they saw us as the boy scouts, the soft target," Kenney told about 3,000 delegates and observers in his keynote speech at the party's founding convention Saturday night.

"If I'm premier, those days are over.

"We will fight back for economic survival."

The battle, he said, will be waged on multiple fronts.

"We will set up a fully staffed rapid response war room in government to quickly and effectively rebut every lie told by the green left about our world class energy industry," he said.

"We will pass a law banning foreign money from being spent by special interests during Alberta elections."

Kenney said a UCP government would create a special legislature committee to probe the sources of foreign money funding any groups working against Alberta's interests.

He vowed to fight through the courts if necessary to get Ottawa to strip charitable status from "bogus charities" such as the David Suzuki foundation.

Suzuki has been highly critical of Alberta's oilsands and has called for it to be shut down.

If companies like HSBC decide to boycott our oilsands, our government will boycott them.Jason Kenney

HSBC, Europe's largest bank, announced last month it would no longer finance fossil fuel ventures such as pipelines and oilsands.

"If companies like HSBC decide to boycott our oilsands, our government will boycott them," said Kenney, adding that he will be rounding up allies.

"We will politely ask the energy industry groups to up their game in telling their story and stop playing defence," he said.

"We need an industry champion to follow the lead of the brave forestry company Resolute Forest Products, which is standing up to bullying by suing (environmental advocate) Greenpeace for defamation."

The speech is set against the background of Alberta fighting to get the Trans Mountain pipeline expanded.

Ottawa has already given approval for the Kinder Morgan project, which would triple the amount of oil flowing from Alberta to tankers on the B.C. coast.

B.C. is fighting the project, saying the risk of oil spills is too high, and Kinder Morgan has now said it will decide by the end of the month whether the project is still feasible.

In retaliation for B.C.'s action, Alberta Premier Rachel Notley briefly banned B.C. wine, and is bringing in legislation that may see oil flows to B.C. reduced, causing gasoline and other prices to potentially spike.

Kenney said Notley's team has misplaced its trust in Prime Minister Trudeau to see the pipeline completed, and has also failed to take the fight to Alberta's opponents.

He said, on the oil front, and in areas ranging from fiscal policy to education to a carbon tax, Notley's NDP deserves to be voted out in the spring 2019 election.

"Our province is being damaged every day by an ideological government that takes its inspiration from the failed theories of socialism, by a resentment of success, a distrust of enterprise," said Kenney.

"The New Democrats are not bad people. They just have bad ideas."

The UCP was created on a plan launched two years ago by Kenney to amalgamate the two right-centre Wildrose and Progressive Conservative parties.

"If we present a positive vision of economic renewal, I guarantee you this tax-raising, debt-quadrupling, job-killing NDP accidental government will be one and done," he said to cheers.

Prepare For Coronavirus Like It's An Emergency: Health Minister

Gwyneth Paltrow's Quip About 'Contagion' Was Not Helpful 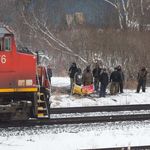 Why Median Incomes In Toronto And Vancouver Are Falling

Senator Apologizes 2 Years After Posting Racist Letters On Her Website

How A Yellowknife Resident Keeps The Winter Blues At Bay

Trudeau: Barricades On Rail Lines, Transportation Routes Must Come Down

5 Famous Canadians Who Could Fit The New $5 Bill