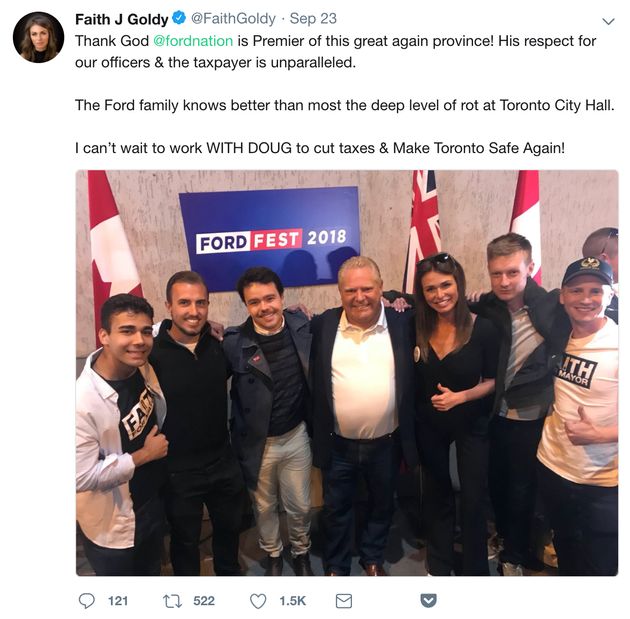 A white nationalist running for mayor of Toronto is now branding herself as "the only candidate who stands with Doug Ford."

In a robocall sent to households across the city, Faith Goldy tries to entice voters by linking herself to Ontario's premier and calling herself, "a common-sense conservative."

Goldy, a white nationalist who's appeared on a neo-Nazi podcast, has said that civilizations should be divided along racial lines and believes white North Americans are currently experiencing genocide.

She told freelance reporter Graeme Gordon that she paid for a million calls, but declined to say what company she hired.

Goldy told me her robocalls are being sent to 30,000 ppl a day. Paid for a total of 1 million calls, but wouldn't mention the company hired. Only found several people mentioning receiving her robocalls on Twitter.

An NDP source said multiple MPPs got messages from concerned constituents about the calls on Tuesday.

Ford denounced Goldy by name on Twitter Wednesday, three days after he was first asked to do so by the NDP.

"I have been clear. I condemn hate speech, anti-Semitism and racism in all forms- be it from Faith Goldy or anyone else," the premier wrote.

I have been clear. I condemn hate speech, anti-Semitism and racism in all forms- be it from Faith Goldy or anyone else.

For days, he answered questions about Goldy by saying he denounces hate, but failed to name her. Ford posed for a photo with Goldy at his annual barbecue, Ford Fest, on Saturday.

NDP MPP Laura Mae Lindo asked Minister of Community Safety and Correctional Services Michael Tibollo in question period Wednesday if he believes Ford should denounce Goldy and apologize for appearing in a photo with her, which is now being used for her campaign.

"We've said it over and over again that there is no place for racism in the province of Ontario," Tibollo said. He said the NDP was creating an issue out of nothing.

10 Looks That Show Meghan Markle Is Our Fall Style Queen

‘We Work Until We Are Dying’: Palm Oil Labour Abuses Linked To Top Brands