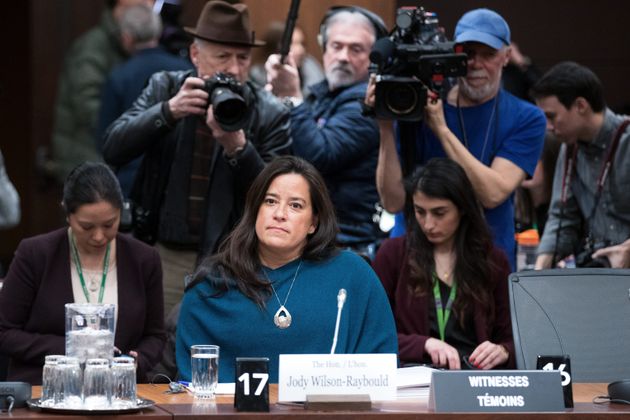 OTTAWA — Jody Wilson-Raybould threw another can of gas on the SNC-Lavalin fire — and prompted calls for her expulsion from the Liberal caucus — with the revelation Friday that she secretly recorded a phone call in which she claims her job as justice minister was threatened if she didn't intervene in the criminal prosecution of the Montreal engineering giant.

An audio recording and transcript of the Dec. 19 call with Michael Wernick, the country's top public servant, was released as part of additional written testimony Wilson-Raybould submitted to the House of Commons Justice committee, which last week shut down its examination of her allegation that she was relentlessly, improperly pressured to intervene in the case.

The 17-minute recording backs up Wilson-Raybould's version of the words spoken during the conversation, about which she told the committee on Feb. 26 during nearly four hours of oral testimony. But it doesn't resolve the question of whether the Privy Council clerk's words constituted "veiled threats," as she has alleged.

Wernick's tone throughout is calm and respectful, while Wilson-Raybould becomes increasingly agitated as she tries to impress on him her belief that intervening in the case would be perceived as political interference in the justice system.

"I am 100 per cent confident I'm doing nothing inappropriate," Wilson-Raybould can be heard telling Wernick.

"This is gonna look like nothing but political interference by the prime minister, by you, by everyone that has been involved in this, politically pressuring me to do this."

This is something I have never done before this phone call and have not done since.Jody Wilson-Raybould

In her written submission, the former minister acknowledges the "extraordinary and otherwise inappropriate step'' of recording the conversation. But she says she was at home alone in Vancouver at the time and was "anxious to ensure that I had an exact record of what was discussed as I had reason to believe that it was likely to be an inappropriate conversation.''

"This is something I have never done before this phone call and have not done since."

Wernick declined to comment directly but his lawyer, Frank Addario, said recording the call was "inappropriate."

"A lot of the tape is her making a speech for a different audience, since she could have just told him she did not want to discuss it further. I don't know any lawyer who records conversations with work colleagues or clients. I don't get the covert ops program or holding on to the tape for a convenient moment," Addario said in an email.

The code of conduct for the Law Society of Ontario, of which Wilson-Raybould is an honorary member, prohibits a lawyer from recording a client without the client's permission. As justice minister and attorney general at the time, Wilson-Raybould was the government's chief lawyer. A spokesman for the law society said Friday that it "does not comment on possible breaches of the Rules of Professional Conduct."

The Canadian Bar Association code of conduct prohibits a lawyer from recording anyone without permission.

Wilson-Raybould has said she believes she was moved out of the justice portfolio to Veterans Affairs in a mid-January shuffle as punishment for refusing to succumb to relentless pressure last fall from Prime Minister Justin Trudeau, his senior staff, Wernick and others to intervene in the SNC-Lavalin case. She resigned from cabinet a month later.

In the recording, Wilson-Raybould repeatedly tells Wernick that the director of public prosecutions had decided to pursue a criminal prosecution of SNC-Lavalin for bribery and fraud related to its work in Libya and that she would not use her power to step in to override that decision and insist upon a remediation agreement. Essentially akin to a plea bargain, such an agreement would mean the company would have faced stiff financial penalties while averting a possible criminal conviction.

During the call, she acknowledges she has the legal right to intervene but argues it would be unprecedented and viewed as political interference.

"This goes far beyond saving jobs. This is about the integrity of the prime minister and interference. There is no way that anybody would interpret this other than interference, if I was to step in," she says.

"I would be a mockery. And that is not the problem. The bigger problem is what it would look like down the road for the government."

At another point, Wilson-Raybould says she's trying to "protect the prime minister from political interference" and if he doesn't accept her advice "then it is his prerogative to do what he wants." She tells Wernick several times she feels "uncomfortable" just having the conversation with him.

"I actually feel uncomfortable having this conversation. It's wrong."

It is not a good idea for the prime minister and his attorney general to be at loggerheads.Michael Wernick

Wernick tells Wilson-Raybould that Trudeau "wants to be able to say that he has tried everything he can within the legitimate toolbox'' to head off the possibility of SNC-Lavalin leaving the country and putting thousands of Canadians out of work. He says Trudeau is "quite determined, quite firm'' about this and adds: "I think he's going to find a way to get it done one way or another. So he is in that kind of mood and I wanted you to be aware of that.

"It is not a good idea for the prime minister and his attorney general to be at loggerheads," he says later. "I am worried about a collision, then, because he is pretty firm about this."

He tells Wilson-Raybould that Trudeau is "not asking you to do anything inappropriate or to interfere. He is asking you to use all the tools you lawfully have at your disposal."

Towards the end of the call, Wilson-Raybould tells Wernick she's "having thoughts of the Saturday Night Massacre here" — a reference to former U.S. President Richard Nixon's attorney general resigning rather than follow the president's order to fire the special prosecutor investigating the Watergate scandal. She also says she's waiting for "the other shoe to drop."

"I am not under any illusion how the prime minister has and gets things that he wants."

Wernick's lawyer said nothing said by the clerk constitutes a veiled threat.

"He was asking for information that only she could give. The clerk said this (remediation agreement) is a legitimate tool and why are we not exploring it here and he asked repeatedly for an explanation to pass on to the prime minister and she refused to give it. She didn't shut the call down," said Addario.

Addario said Wernick did not know the call had been recorded until it was released Friday, although he appeared to anticipate it during his second appearance at the justice committee on March 6. In response to questions about his recollections about the conversation, Wernick snapped: "I did not wear a wire, record the conversation or take extemporaneous notes."

In a statement late Friday, the Prime Minister's Office said Wernick did not brief Trudeau about his Dec. 19 conversation with Wilson-Raybould and he was unaware of its full contents until the recording was released.

Addario said the day after the conversation, "everyone went on holidays." By the time they returned at beginning of January, "the first burning issue" was Scott Brison's retirement and the consequent cabinet shuffle.

"The SNC issue never made it back to the top of the discussion list. The clerk never discussed SNC again with the PM or PMO until someone leaked the story to The Globe and Mail in early February."

The PMO statement reiterated Trudeau's previous admission that "he should have spoken directly" with Wilson-Raybould about the matter and that "he wishes she had come to him" with her concerns about improper pressure. He again attributed the controversy to an "erosion of trust" between her office and his, and tried to close the door on the fiasco, which has engulfed his government for two months, cost him two cabinet ministers, his principal secretary and Wernick, who officially retires on April 19 after concluding he's lost the confidence of opposition parties following his combative testimony at committee.

"All the facts are on the table now and everyone involved has shared their perspective," the statement said, adding it's time to "move forward as a team on the issues that matter to Canadians."

If they had any sense of decency, they would resign before it would even get there.Alexandra Mendes, Liberal MP

However, Liberal backbenchers appear to be in a less forgiving mood.

Montreal MP Alexandra Mendes called Wilson-Raybould's secret recording "horrendous" and called for her and Jane Philpott — who resigned from cabinet earlier this month saying she had lost confidence in the government's handling of the SNC affair — to be booted out of caucus.

"If they had any sense of decency, they would resign before it would even get there," Mendes said in an interview, questioning why anyone would want to stay "where they're clearly not wanted."

Liberal MPs have been growing increasingly upset with Wilson-Raybould and Philpott's seeming desire to keep fanning the flames of the controversy and have been quietly discussing among themselves this week — a break week for Parliament — how to deal with the pair. The expectation now is that caucus members will insist on expelling them at their next meeting on Wednesday, or earlier if an emergency meeting is called. Precisely how to go about that is being debated since votes are not normally taken in caucus.

The documents released Friday also include transcripts of text messages and notes on phone calls Wilson-Raybould or her chief of staff, Jessica Prince, had with various senior government staffers.

One of them is a phone call between Prince and Justin To, Finance Minister Bill Morneau's deputy chief of staff, in which he says that there is a sense that Wilson-Raybould "has a philosophical problem" with the concept of remediation agreements, a new tool for dealing with cases of corporate corruption that went into effect last September.

"That she hated it the whole time and wouldn't even use it if we could," To allegedly told Prince, who told him that wasn't true.

In her submission, Wilson-Raybould also complains that the controversy over her allegations has included "undeniable elements of misogyny, much of it aimed at myself."

And while she says, "I do not believe I have anything further to offer a formal process regarding this specific matter," she say she would comply "if compelled or asked to participate in a judicial, investigative or parliamentary process."

NDP Leader Jagmeet Singh said Wilson-Raybould's latest revelations are "so compelling and well documented" that they prove the need for an independent public inquiry into the whole affair.