When new Canadian leaders are elected, I try to keep an open mind and give them a chance before passing judgement. It seems to me that's the Canadian way.

Stephen Harper was no exception: in 2006, I actually looked forward to seeing where he would lead our country.

But before long, I found myself getting concerned about the direction he and his team were taking us -- concerned enough to start keeping a 'blog-book' of policies and actions that were making me uneasy.

I'm sad to report that my blog-book now has many entries. Here's one:

The Death of Evidence?

Each summer, our family has a ceremonial bonfire to celebrate the end of the school year. Last June, my son gleefully tossed several of his notebooks into the flames -- to my chagrin. But, realistically, it probably wasn't much of a loss since the contents are just a quick Google search away.

Contrast those notebooks to the nine libraries of Canada's Department of Fisheries and Oceans -- world famous collections of unique information that will never be available through Google. Rachel Carson used the library in St. Andrews, New Brunswick, when she was researching Silent Spring.

In 2013, seven of the nine libraries -- including the one in St. Andrews, which had just been upgraded -- were closed. In theory, all information was to be digitized and made centrally available. In reality, not enough money was set aside for that task, so dumpsters full of irreplaceable collections were sent to landfills instead. All, apparently, to save a half million dollars.

Some refer to this disturbing trend as the death of evidence. It's worrisome, because if the decisions our leaders are making are not based on evidence anymore, just what are they based on?

Behind the smokescreen of Terrorism

While on a business trip to Venezuela years ago, I suddenly found myself in the middle of civil unrest. It was frightening; there were riots, curfews and soldiers everywhere. I still remember my late night flight out of Caracas -- one of the last before the airport was closed. Upon landing back in Canada, I wanted to kiss the ground, so grateful was I for the peace, civility and freedom we have here.

But Bill C-51 proves that we should take none of this for granted. Shrewdly marketed as part of the "war on terrorism," it gives sweeping new powers to Canada's security and intelligence agencies. It allows them to spy on you and me on the slightest suspicion that we might be up to mischief, or throw us in jail without charge. It allows them to do things you and I would go to jail for - including using questionable means to extract information.

Under Bill C-51, the definition of terrorism is thrown wide open to include anything from protests to blogs. The bill allows our personal information to be widely shared within government, and even with foreign security agencies. 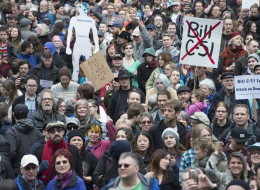 Bill C-51 has been roundly condemned by the Canadian Bar Association. Five former Supreme Court justices and four former prime ministers have spoken out against it. After analyzing the bill, more than 100 law professors sent an open letter to all MPs urging them to vote against it. But none of that mattered in the end -- the Harper government used its majority to pass C-51 earlier this year. A National Post columnist denounced the bill as having "a whiff of totalitarianism."

Of course threats against our national security should never be taken casually, but most experts agree Bill C-51 is a massive overstretch; it's an egregious breach of our rights and freedoms.

I am a reluctant activist. I don't like rocking the boat. But when our federal election was called in August, it occurred to me that the entries in my blog might be worth sharing. So I'm posting 78 of them to a Facebook page, 78 Days, 78 Reasons: one for each day of the campaign. It's my hope they'll help reasonable Canadians, particularly young people and small c-conservatives, see that we deserve better than Stephen Harper because we are better than Stephen Harper.

"You won't recognize Canada when I'm through with it," Mr. Harper said in 2006. I worry it's true, and this is my little effort to push back.

Feds To Match Donations From Canadians To Beirut Relief Efforts

What You Need To Know About The Six Nations Blockades

Canadian Dies Before Deportation After Getting COVID In ICE Custody