Pumpkin season is upon us, which means it's only a matter of days before the we get hit in the face with the smells and flavours of everything pumpkin spice. Your body washes, airfresheners, alcohol, cookies and creamers. And that's only in Canada -- they take it much further in the States.

The multimillion-dollar coffee chains are getting a head start on showcasing their fall menus. It's no surprise that Starbucks started to advertise their Pumpkin Spice Latte the first week of September, while the smaller coffee chains are still solidifying their changing menus.

Here's your roundup of who's doling out pumpkin treats and drinks in the Toronto area and beyond:

There are coffee shops that have no interest on jumping on the pumpkin spice latte bandwagon, however they still offer a little something for those that need their pumpkin fix. These coffee chains below skip out on pumpkin drinks but serve up pumpkin eats:

They carry this muffin almost all year round at certain locations.

This flavour is in their rotation of soups.

Bakeries don't miss out on selling what's trending, as baking enthusiasts like myself are willing to make an out-of-the-way visit to see what's on the seasonal menu.

(Worth the trek to Mimico, so I've heard.)

Each week Prairie Girls serve up new features and flavours, above is their pumpkin lineup.

You won't find any signature macarons with a pumpkin twist, instead you'll see tarts made with traditional pumpkin purée, pumpkin pie spices in a shortbread crust, with or without chantilly cream, calling your name from behind the glass window.

Rarely do you hear about cold pumpkin treats. I found a few worth mentioning:

They carry over 125 flavours of ice cream, gelato and frozen yogurt and one of them is pumpkin.

This is a mexican popsicle covered in buttered graham crumbs and spiced cinnamon sugar.

For fall LCBO carries Pumpkin Ales, Porters, Saison, Whisky and even a Kahlua Pumpkin Spice Limited Edition Liquor. The Kahlua sounds gross but I must try it.

The coffee giants have always been in competition with other coffee giants, it's no surprise that the chains listed below were first to promote their pumpkin spice menu items.

Espresso, milk, flavoured with notes of pumpkin, cinnamon, nutmeg and cloves. Topped off with whipped cream and real pumpkin pie spice, for that extra indulgence. A frappuccino is basically the same thing but colder since it's made with ice.

If it's your cheat day (or not), pair your drink with their many pumpkin treats: Pumpkin Bread, Pumpkin Cheesecake Bar, Pumpkin Cream Cheese Muffin, Pumpkin Scone and Pumpkin Sugar Cookies.

They're not big on disclosing details, so you'll just have to check it out for yourself.

Why are we so obsessed with pumpkin spice? 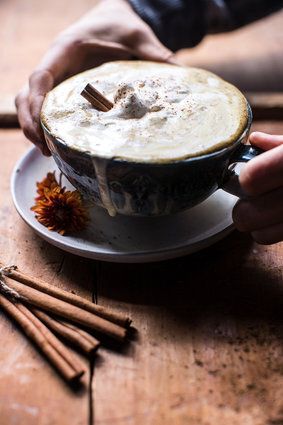