Marking Canada's 150th anniversary, the CBC has unleashed the documentary series Canada: The Story of Us.

And because this is Canada: cue controversy.

Truthfully, it's an almost impossible task: cramming centuries of one of the largest, most multicultural countries in the world into a few hours -- and to pretend it forms some sort of coherent narrative. This is not a problem unique to Canada (as Brexit and American "red" and "blue" states have shown, unifying "national identities" are often wishful thinking).

CBC apologizes but won't update episodes of contentious Canada: The Story of Us https://t.co/HoDSIAmbmEpic.twitter.com/t010P05pjt

Any time someone pontificates about Canada, they're going to get it in the neck -- from regionalists who get red faced when any region but their own gets a moment in the spotlight, from "too cool for school" hipsters who mock anything that smacks of Canadian self-confidence, from people who simply feel their agenda isn't being represented.

But those decrying the series' omissions are missing its intent. It's not intended as a comprehensive historical overview.

This is The Dragon's Den Guide to Canada. Based on the first four episodes (I didn't want to form a snap opinion), the narrative the filmmakers have chosen is an orgasmic paean to business and entrepreneurship.

Now, it's true that European incursion was often driven by commerce. But it's a conspicuously single-minded focus when even families are described at one point as an "economic unit." It presents this vision largely uncritically and without analysis (why did Montreal's Victoria Bridge need to be completed ahead of schedule, forcing the workers to do double shifts?). After business, the filmmakers seem most interested in battles, devoting a whole episode to the War of 1812 (though even then assuring us it bolstered Halifax's shipping industries).

The series could've avoided some of the criticism if it had been more willing to acknowledge history's messy complexity.

Partly this is because they want to define Canadian history by heroic deeds and risk-takers, possibly as an understandable push back against the traditional cynicism that says Canada is "boring." Except they seem to want to say the guys who really deserve commemorative statues aren't politicians and social reformers, but businessmen and entrepreneurs.

I wonder if the series would've received less flak simply with a different title (maybe Canadian Risk-Takers). Though even then those highlighted are defined less by who they were as human beings and more by how they advanced Canada's fiscal bottom line.

Oppression, rebellions, social advances, and political reforms are mostly ignored in favour of commerce and enterprise (spiced with the occasional battlefield bad-assery). All of it served up as sanitized, feel good successes.

When shaping non-fiction into a narrative, part of the job is to find patterns. But it's problematic if an agenda is driving your choice of facts, rather than the facts shaping your conclusion.

So while it's an important part of Canada's multicultural narrative to mention a black ex-slave fighting for Canada during the War of 1812, how the hell can you do so without once mentioning Canada's own history of slavery?

And it's not just white Anglophone history that gets cleaned up and, uh, whitewashed. English, French, First Nation -- all are presented in their Sunday best without a great deal of nuance or moral ambiguity.

The series could've avoided some of the criticism if it had been more willing to acknowledge history's messy complexity and contradictions, letting different perspectives be heard so that we, the viewer, can decide for ourselves what it all means. But the filmmakers seem determined to control the interpretation.

This brings us to the series' use of talking heads. Although some are historians and experts -- a lot are cultural figures, including actors like Lorne Cardinal, Colm Feore, and Missy Peregrym.

That could've been fun, a bit like the British radio series, The Rest is History, in which non-historian celebrities are asked what they know about certain historical events. But the celebrities here seem suspiciously like they've been coached, often simply saying "Wow, that took courage" after a scene of someone doing something courageous. The commentators only really enliven things when they have some expertise to add (like when modern architects and builders comment on 19th century engineering projects).

Maybe Canada needs a history documentary that's willing to let its hair down and be unconventional.

Now, maybe actress Pascale Bussieres has had a lifelong fascination with 18th century iron mongery and jumped at the chance to talk about it on TV. But they can seem like celebrities hired for a late-night infomercial, there to reinforce the orthodoxy presented by the dry, barely modulated narrator's voice. At its worst it can feel Orwellian, or like the actors are assuring us these aren't the droids we're looking for (just to work in a spread of pop references).

And then there are just some odd bits, like the narrator referring to "portage" as something French-Canadians say -- but, um, isn't that what everyone says?

Beyond all this, the series is a bit dry, failing to dig beneath the surface or highlight anything idiosyncratic (they devote a section to Laura Secord without mentioning the folklore involving her apocryphal cow!). Some Heritage Minutes give you as much info (and context) in a fraction of the time.

I say this as someone with only spotty knowledge of history myself (a few years ago I posted a lay person's examination of the War of 1812, which is probably best read imagining a slightly slurred voice like something out of a Drunk History episode).

This isn't to say there aren't interesting bits, shining a light on notable achievements of the past. The segment about pioneering feminist journalist Kit Coleman is one of the few times the filmmakers start to address social issues, not just mercantile ones.

Maybe Canada needs a history documentary that's willing to let its hair down and be unconventional. I'm reminded of a War of 1812 documentary (Been There, Won That) hosted by actor Peter Keleghan, which was deliberately tongue-in-cheek. Or something like the Naked Archaeologist.

In a country as vast and complex as Canada, maybe a better approach would be to make each episode with a specific focus (the evolution of women's rights, the development of democracy, Asian immigration, the history of a particular region, etc.) so that a proper picture only develops once you've seen all the episodes.

Maybe the next big CBC documentary series purporting to tell the story of Canada could be titled something like: 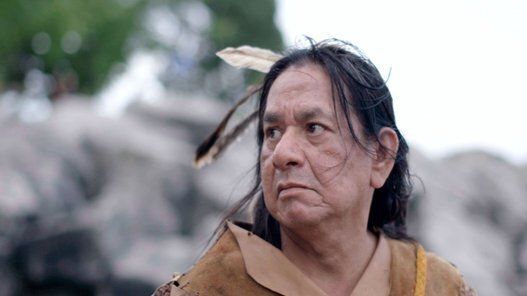