WASHINGTON — Confidence in the Canadian economy took a dramatic dive over the summer in the midst of the COVID-19 pandemic — a whipsaw pivot seen around the world but sharper in Canada than any other country surveyed in a new global public opinion poll. 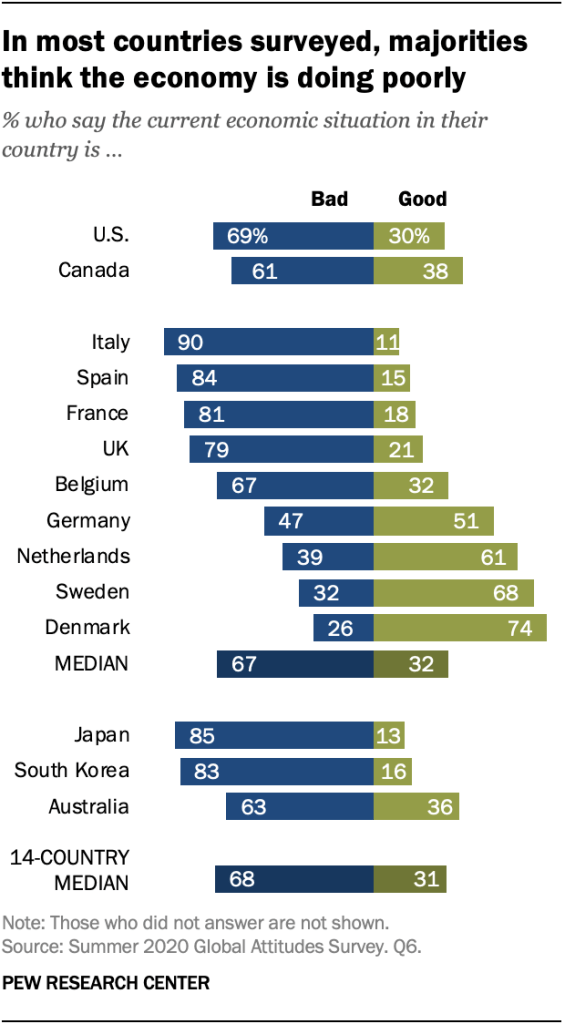 Sixty-one per cent of Canadians who took part in the Pew Research Center survey released Thursday described the country’s current economic situation as bad, more than twice the 27 per cent who said the same thing last year.

Of the 14 countries included in the poll, the 12 that were also asked the same question last year all reported double-digit reversals in sentiment, with Canada’s 34 percentage-point change leading the way.

“The economy had turned bleak in most of the countries we surveyed around the world, and in most places, people expect that the worst is yet to come,” said Shannon Schumacher, a Pew research associate and the report’s lead author.

“There is also this relationship between how you think your country has handled coronavirus and how you think the economy is doing.”

The Canadian segment of the survey, conducted by phone with 1,037 adult respondents between June 15 and July 27, carries a margin of error of 3.7 percentage points, 19 times out of 20.

The spike in negative sentiment may say more about the outlook Canadians had on the economy in 2019 than they currently do, Schumacher noted. 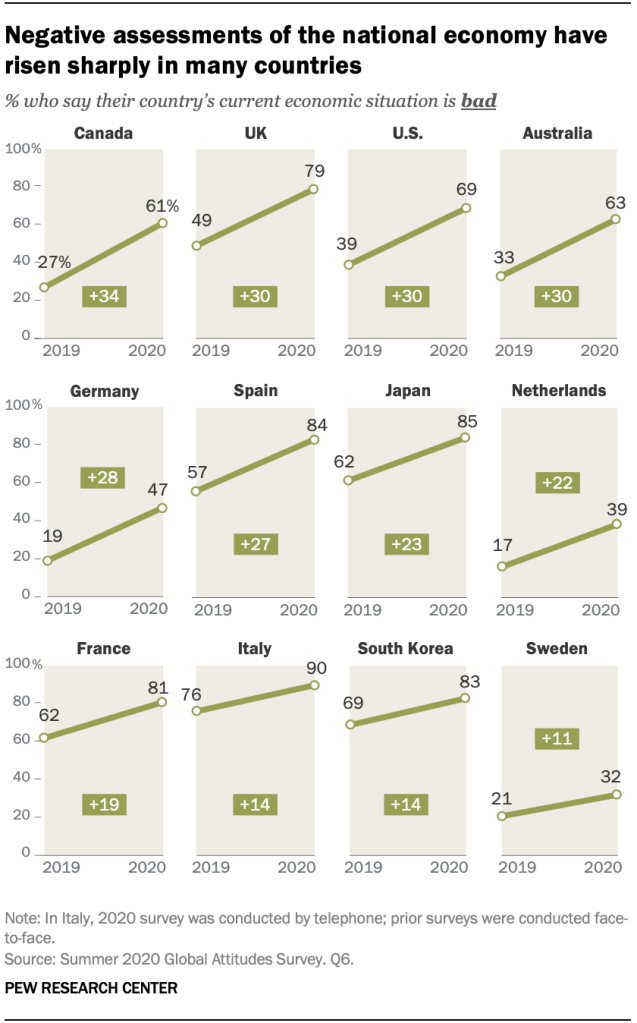 “Canada is where we saw the largest uptick in negative assessments of the economy ... but it’s 27 per cent who said that they thought the current economic situation was bad in Canada in 2019,” she said. “That’s among the lowest of the countries we surveyed — only in Germany, the Netherlands and Sweden was that percentage lower last year.”

Of those surveyed in the U.S., 69 per cent said they believe the economy is doing poorly, compared with 30 per cent who disagreed — a finding roughly in line with the 14-country median results of 68 per cent and 31 per cent.

Which countries were optimistic?

Only in Europe did a majority of respondents say their domestic economies were faring well, with Denmark and Sweden leading the way, at 74 per cent and 68 per cent, respectively.

The two Scandinavian nations are notable for their dramatically different pandemic strategies: Sweden initially adopted a libertarian, herd-immunity approach, while Denmark was the second country in Europe to impose a nationwide lockdown.

“But even (in Sweden), GDP is expected to contract by roughly 5 per cent in 2020, and Swedes are 11 percentage points more likely to think economic conditions in their country are poor than in 2019,” the Pew report says.

The report documents an unsurprisingly dismal outlook for the world’s economic prospects, with Canada and the U.S. as notable outliers.

Only in Canada and Australia were people with lower household incomes more likely than those with higher incomes to say the economic situation is bad.Shannon Schumacher, lead author on report

Only Spain, Germany and Australia reported similar levels of optimism.

Almost across the board, those who disapproved of how their country has handled the outbreak were more likely to describe the economy as poor. In Canada, 85 per cent of those disappointed in the government’s handling of COVID-19 had a negative view of the economy, compared with 58 per cent of those who gave the feds a passing grade on the pandemic.

In the U.S., 87 per cent of those disappointed in the Trump administration’s handling of the outbreak described the economy as bad, compared with 50 per cent of those who said the government has done a good job.

Canada also stood out in the study for another reason: it was one of only two countries where researchers saw a correlation between income levels and a negative view of the economy.

“Only in Canada and Australia were people with lower household incomes more likely than those with higher incomes to say the economic situation is bad,” Schumacher said.

“Only in a few countries did gender, age or income seem to have an impact. This is seemingly a universal thing, how people are thinking about the economy — it doesn’t seem to be impacted by demographic features in most of the countries we surveyed.”

This report by The Canadian Press was first published Sept. 3, 2020.

What Would A Further-Left Green Party Mean For Canada?

9 Parenting Tips From Michelle Obama And Her Mom

You Need To Watch This Montreal Band's Powerful Video About Consent