If the pristine rooms in the homes of my friends and family are any indication, the dining room is perhaps used for two or three dinners a year. Thanksgiving. Maybe the holidays. But that's about it. After those instances pass, it reverts to its role as a museum for china and glassware, or perhaps a life-size diorama of how families used to eat.

The dining room, it seems, is going out of fashion. Meals are eaten around the kitchen (island, table or sink) or, more likely, on the coffee table at an hour our grandparents would probably consider to be “bedtime.” We’re all busier than ever, working longer than ever.

Pam Kueber, the wonderful blogger behind Retro Renovation and an expert on the home trends of then vs. now, has a theory behind the phenomenon.

“In the early 20th century and prior, many homes had servants. The kitchen was their separate domain, while the family ate in the dining room," Kueber says. "As that tradition died away — and as Mom began to do all the kitchen work herself — we wanted to hang with her and she wanted to hang with us, so the lines between kitchen and dining room began to blur and design evolved towards the 'open concept' kitchen so popular today.” 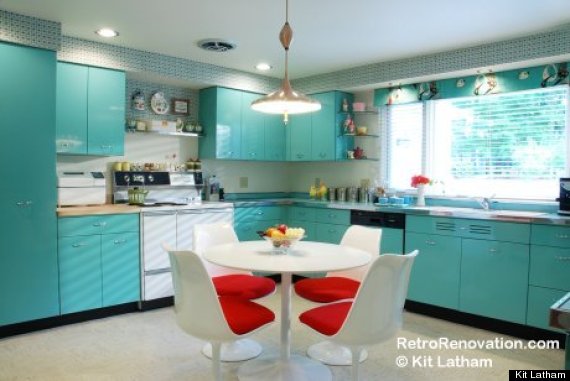 At home, Kueber's family takes meals in the dining room, on TV trays or at the dinette set in her kitchen (shown above). But she still appreciates the boundary of a separate eating area.

“I love closing the door to my kitchen and having a peaceful dinner in my separate dining room, where the big clean-up ahead is out of sight and out of mind," she said. "For a while, at least.”

Yet, as far as building trends go, the dining room has become more of a fixture in modern day homes. According to a U.S. Census survey that focused on the evolution of new American homes by decade, 46.9 percent of homes constructed before 1960 had dining rooms, compared to 50.6 percent of homes constructed between 2005 and 2009. Keuber chalks up these numbers to the fantasy that often is involved with decorating and designing a new home.

“We buy and furnish our home the way we imagine we want to live,” Kueber says. “Today, I think people still like the idea of a separate dining room because of idyllic visions of Thanksgiving Day and big family gatherings that rarely end up happening.”

Tonight, I’ll be eating dinner on an antique table that functions as an office, dining table and, occasionally, the basis of a junk pile. Honestly, if our modern apartment had a formal dining room, it would’ve been turned over to a work or hobby space. I wonder if this is just practicality speaking, or if I’m contributing to the decline of "nice things," like dining rooms and letter writing.