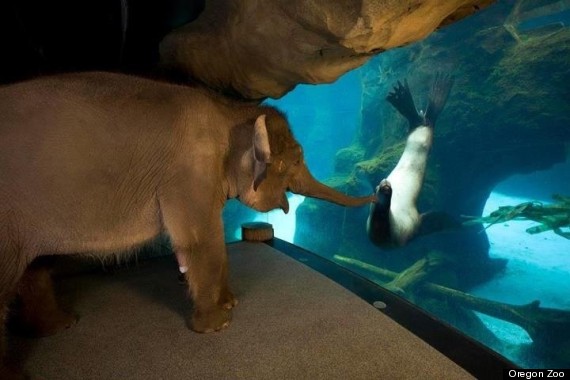 Chendra, an Asian elephant at the Oregon Zoo, likes to take morning walks with her handlers. One day, she stopped by the zoo's Steller Cove. There, a sea lion named Gus came out to greet her. The result? A super cute photo-op sure to brighten anyone's day.

According to an email from zoo spokesperson Michael Dunham, this photo was taken in 2007 and was not digitally manipulated in any way. Dunham told The Huffington Post that the elephants aren't walked around in the morning anymore.

African and Asian elephants face danger due to poaching, hunting, habitat destruction and mistreatment in captivity, but there are numerous conservation groups worldwide that advocate for elephant protection.

In the wild, threats to sea lions include pollution, habitat degradation, illegal hunting, and boat strikes or entanglement in fishing equipment, according to the Oregon Zoo website.

Sea lions are protected under the Marine Mammal Protection Act, but sometimes fishermen will shoot and kill them for interfering with their salmon catch.

Mutual 'Nightmare' For Landlords And Tenants As Pandemic Bills Pile Up