Gay retirees in France will now have an entire village to call home.

In a landmark decision, the mayor of Sallèles d'Aude in southern France recently approved plans for a gay retirement village. However, it seems Mayor Yves Bastié did not know exactly what he was approving.

"I was flabbergasted because I knew nothing of it," Bastié, who signed off on the permit in March, told the Agence France-Presse Tuesday. "What will be the effect on the image of the town?"

According to RTL France, the Sallèles d'Aude mayor learned of the community's real purpose this week after seeing the announcement on the website for Le Village-Canal du Midi. 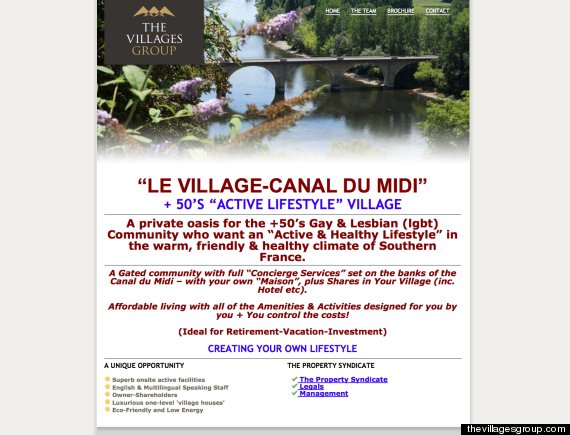 While Bastié is now publicly contesting the application, holding that it did not include any mention of the town's true purpose, developer Danny Silver explained to France TV that plans changed late in the game. The project developer initially obtained permits to build a village open to all, but failed to attract enough customers. So he decided to make a change in strategy and opted to cater to France's booming gay community.

"In one day, I had more inquires than I had in three months," Silver told France TV.

Despite Bastié's comments, it seems the project will go ahead as planned.

The over-50s "active lifestyle" community will feature 107 houses in "traditional village style" that will be separated from other hamlets owned by the Villages Group, a British company that builds retirement communities in France. Homes will cost 236,000 euros (about $312,000) or 248,000 euros (nearly $328,000), along with weekly maintenance fees of 70 euros ($92).

Though Silver assures that the homes will be offered primarily for gay and lesbians over 50, the village will not ban heterosexual couples (as required by law).

The gay retirement community is the latest in a series of firsts for France's LGBT community, following the legalization of gay marriage in May.

A Family Captures Their Quarantine Hotel Journey In Canada

How CERB, EI and CRB Will Affect Filing Your Taxes

Canada's Economy Off To Roaring Start After Worst Year On Record