In 2011, a tsunami sent waves as high as 49 feet crashing over the seawalls surrounding the Fukushima Daiichi Nuclear Power Plant in Japan, causing meltdowns at three of the plant's reactors. After that incident, the United States Nuclear Regulatory Commission (NRC) ordered nuclear facilities in the U.S. to review and update their plans for addressing extreme seismic activity and potential flooding from other events, such as sea level rise and storm surges. Those plans aren't due until March 2015, which means that many plants have yet to even lay out their their potential vulnerabilities, let alone address them.

During the 1970s and 1980s, when many nuclear reactors were first built, most operators estimated that seas would rise at a slow, constant rate. That is, if the oceans rose a fraction of an inch one year, they could be expected to rise by the same amount the next year and every year in the future.

But the seas are now rising much faster than they did in the past, largely due to climate change, which accelerates thermal expansion and melts glaciers and ice caps. Sea levels rose an average of 8 inches between 1880 and 2009, or about 0.06 inches per year. But in the last 20 years, sea levels have risen an average of 0.13 inches per year -- about twice as fast.

And it's only getting worse. The National Oceanic and Atmospheric Administration (NOAA) has laid out four different projections for estimated sea level rise by 2100. Even the agency's best-case scenario assumes that sea levels will rise at least 8.4 inches by the end of this century. NOAA's worst-case scenario, meanwhile, predicts that the oceans will rise nearly 7 feet in the next 86 years.

But most nuclear power facilities were built well before scientists understood just how high sea levels might rise in the future. And for power plants, the most serious threat is likely to come from surges during storms. Higher sea levels mean that flooding will travel farther inland, creating potential hazards in areas that may have previously been considered safe. During Superstorm Sandy, for example, flooding threatened the water intake systems at the Oyster Creek and Salem nuclear power plants in New Jersey. As a safety precaution, both plants were powered down. But even when a plant is not operating, the spent fuel stored on-site, typically uranium, will continue to emit heat and must be cooled using equipment that relies on the plant's own power. Flooding can cause a loss of power, and in serious conditions it can damage backup generators. Without a cooling system, reactors can overheat and damage the facility to the point of releasing radioactive material. 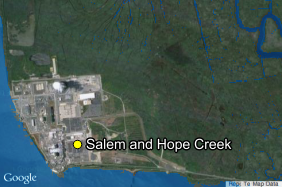 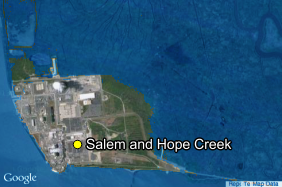 Though water levels during Superstorm Sandy came close to reaching the Salem 1 nuclear reactor at Lower Alloways Creek, N.J., “near-term sea rise is not an immediate concern” for the facility, said Joe Delmar, the nuclear communications manager for the plant's owner, PSEG Nuclear. Company documents provided to The Huffington Post indicate that the Salem plant was designed to withstand flooding of up to roughly 30 feet above sea level, and PSEG estimates that sea levels will increase 6 inches by 2046, when the operating licenses for the plant’s reactors will expire. But using NOAA's evaluation of future sea level estimates, The Huffington Post found the worst-case rise in sea level at the plant to be 1.79 feet by 2046 -- more than a foot higher than the estimate that PSEG Nuclear is using at the Salem plant. More troublingly, HuffPost estimates that if sea levels rise to the heights projected in NOAA’s worst-case scenario, and then a storm hits on top of that, floodwaters could rise to less than a foot below the Salem plant’s base.

Nuclear plants were originally given a license to operate for 40 years, and in the late 1990s, the NRC began accepting applications to extend those licenses for an additional 20 years. While it’s not clear how many current plants will still be operating in 2100, most facilities store their nuclear waste on-site, where it can continue to emit radiation for thousands of years. There is currently no long-term national storage site for spent nuclear fuel in the U.S., as Congress cut the funding to build such a facility at Nevada’s Yucca Mountain in 2011. While there are no near-term plans to remove nuclear waste from the coastal plants threatened by rising seas, "the expectation is that [waste] won't remain on-site," said NRC Senior Public Affairs Officer Roger Hannah.

Despite the increased risk of flooding due to rising sea levels, some plant operators have not factored this into their long-term plans. In 2010, when Florida Power and Light Company applied for a license to build two additional reactors at the Turkey Point Nuclear Generating Station in Homestead, Florida, the NRC asked the plant's owners to explain "how potential sea-level rise due to potential future climate change is accounted for" in their plans, NRC documents show. The company declined to discuss climate change in its analysis, and used a projection that assumed a constant sea level rise of just 1 foot per century, which is 5.6 feet lower than NOAA's worst-case projection for 2100. 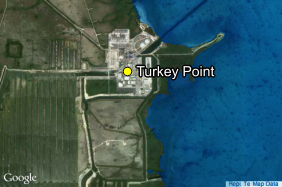 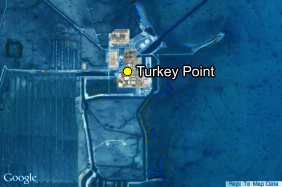 Estimated worst-case flooding
in 2033 during storm.

Ahead of the start of the Atlantic hurricane season on June 1, The Huffington Post and Weather.com identified eight nuclear power plants that are likely to be vulnerable to flooding by 2100 under NOAA's projections for rising sea levels. Though the operating licenses for each plant will expire before 2100, the potential exists for flooding much earlier than that. We combined the elevation of each plant with the projections for future sea level rise based on methods contained in NOAA's 2012 report. To estimate future worst-case flooding scenarios, we added the historic peak storm tides recorded at each site to NOAA's worst-case sea level projections for the year when the plant's current operating license is set to expire. 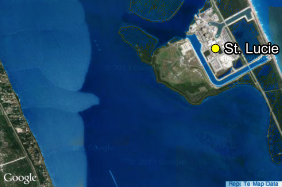 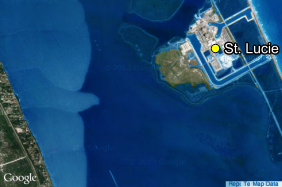 Estimated worst-case flooding
in 2043 during storm. 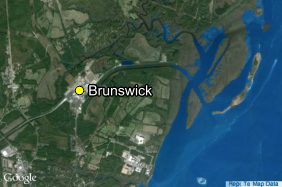 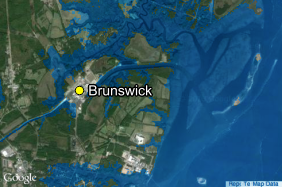 Estimated worst-case flooding
in 2036 during storm. 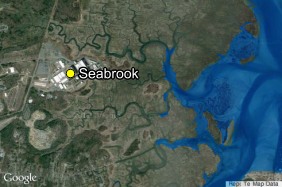 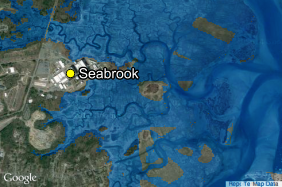 Estimated worst-case flooding
in 2030 during storm. 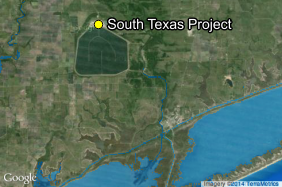 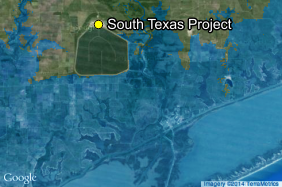 Estimated worst-case flooding
in 2028 during storm. 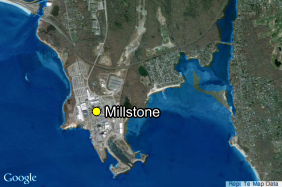 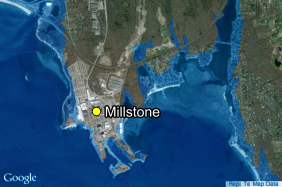 Estimated worst-case flooding
in 2045 during storm. 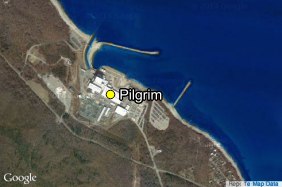 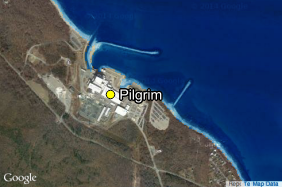