By now, everyone's just about had it with the Westboro Baptist Church, a group whose members use national tragedies as opportunities to forward anti-gay hate speech. Ironically, their planned protests often bring communities together in opposition to their message. Now, an unlikely group has mounted a gay offensive against the WBC.

On Sunday, July 14, the Satanic Temple, a New York-based organization that seeks to foster "benevolence and empathy among all people" through Satan, performed a ritual called a "pink mass" at the Mississippi gravesite of Catherine Idalette Johnston, mother of WBC founder Fred Phelps Jr.

The aim? To "turn" the WBC founder's mom gay for all eternity.

"Upon completion of the pink mass ceremony, Catherine Johnston is now gay in the afterlife," notes the Satanic Temple website, which has the cheeky URL www.westboro-baptist.com. "Fred Phelps is obligated to believe that his mother is now gay ... [and] if beliefs are inviolable rights, nobody has the right to challenge our right to believe that Fred Phelps believes that his mother is now gay."

The latter assertion appears to be a play on the WBC's own stance that their beliefs are totally infallible.

The Pink Mass was performed twice -- once with two gay men, and once with two lesbians -- in an affirmation of the Satanist Temple's belief in "freedom and the pursuit of happiness for all people." The temple is now encouraging same-sex couples to visit the grave and perform their own pink masses.

According to the Satanist Temple website, a temple spokesman who goes by the name Lucien Greaves officiated the ceremonies while wearing horned headgear, and then proceeded to put his penis on Johnston's grave (NSFW, obviously). 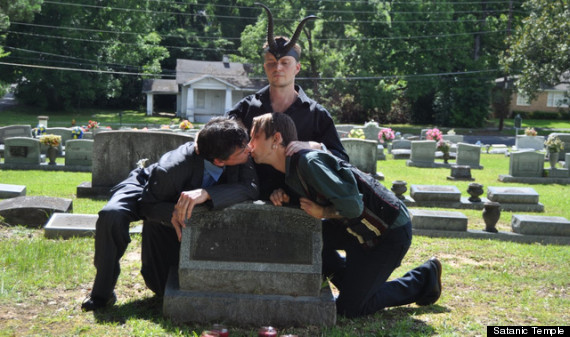 Vice reports that the idea for the pink mass came about in April, after the WBC threatened to protest the funerals of the Boston Marathon bombing victims. The website compared the the pink mass to "the Mormon practice of baptizing the dead, only much gayer."

In an email to The Huffington Post, Greaves indicated that the ritual could be an effective counter-protest.

"We intend to perform the pink mass for both Fred Phelps's father and great-aunt who raised him after his mother's death, but only in reply to their future pickets. The pink mass could be used to protest other anti-gay hysterics, but it is particularly appropriate when applied to Westboro," Greaves wrote.

Meghan Markle And Prince Harry Have A Long, Special History With Canada

Are Harry And Meghan Dropping Their Royal Titles, Or What?

How To Get Kids To Sleep Earlier Without A Fight