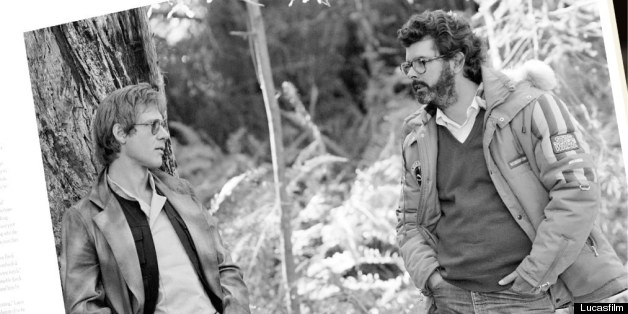 On May 25, the third film in the original Star Wars trilogy, "Return of the Jedi," will turn 30 years old. To celebrate, HuffPost Entertainment is publishing this exclusive excerpt from J.W. Rinzler's excellent "The Making of Star Wars: Return of the Jedi," due to be released on October 1.

To give the others a better idea of who Darth Vader is, George Lucas maps out the character's pre-Dark Side life as Anakin Skywalker. Lucas' words here, in 1981, offer a startlingly accurate preview of what would eventually become the "Star Wars" prequels, released between 1999 and 2005. And yet there are notable exceptions, as well. For instance, Lucas compares The Force to yoga and says anyone can use it, which seems to conflict with what we learned about midi-chlorians in "The Phantom Menace." And he's adamant that Yoda does not fight -- an opinion he clearly revised sometime before 2002's "Attack of the Clones."

Note: Many of the ideas here are conceptual only and should not be considered as canon in the Star Wars saga.

THE STORY OF ANAKIN

Lucas: Anakin Skywalker starting hanging out with the Emperor, who at this point nobody knew was that bad, because he was an elected official.

Kasdan: Was he a Jedi?

Lucas: No, he was a politician. Richard M. Nixon was his name. He subverted the senate and finally took over and became an imperial guy and he was really evil. But he pretended to be a really nice guy. He sucked Luke’s father into the dark side.

Kasdan: The Force was available to anyone who could hook into it?

Lucas: Yes, everybody can do it.

Kasdan: Not just the Jedi?

Lucas: It’s just the Jedi who take the time to do it.

Marquand: They use it as a technique.

Lucas: Like yoga. If you want to take the time to do it, you can do it; but the ones that really want to do it are the ones who are into that kind of thing. Also like karate. Also another misconception is that Yoda teaches Jedi, but he is like a guru; he doesn’t go out and fight anybody.

Kasdan: A Jedi Master is a Jedi isn’t he?

Lucas: Well, he is a teacher, not a real Jedi. Understand that?

Kasdan: I understand what you’re saying, but I can’t believe it; I am in shock.

Lucas: It’s true, absolutely true, not that it makes any difference to the story.

Kasdan: You mean he wouldn’t be any good in a fight?

Lucas: Not with Darth Vader he wouldn’t.

Kasdan: I accept it, but I don’t like it.

Lucas: Well, anyway, Luke’s father gets subverted by the Emperor. He gets a little weird at home and his wife begins to figure out that things are going wrong and she confides in Ben, who is his mentor. On his missions through the galaxies, Anakin has been going off doing his Jedi thing and a lot of Jedi have been getting killed—and it’s because they turn their back on him and he cuts them down. The president is turning into an Emperor and Luke’s mother suspects that something has happened to her husband. She is pregnant. Anakin gets worse and worse, and finally Ben has to fight him and he throws him down into a volcano and Vader is all beat up.

Now, when he falls into the pit, his other arm goes and his leg and there is hardly anything left of him by the time the Emperor’s troops fish him out of the drink. Then when Ben finds out that Vader has been fished out and is in the hands of the Empire, he is worried about it. He goes back to Vader’s wife and explains that Anakin is the bad guy, the one killing all the Jedi.

When he goes back his wife, Mrs. Skywalker has had the kids, the twins, so she has these two little babies who are six months old or so. So everybody has to go into hiding. The Skywalker line is very strong with the Force, so Ben says, “I think we should protect the kids, because they may be able to help us right the wrong that your husband has created in the universe.” And so Ben takes one and gives him to a couple out there on Tatooine and he gets his little hideout in the hills and he watches him grow. Ben can’t raise Luke himself, because he’s a wanted man. Leia and Luke’s mother go to Alderaan and are taken in by the king there, who is a friend of Ben’s. She dies shortly thereafter and Leia is brought up by her foster parents. She knows that her real mother died.

Kasdan: She does know that?

Lucas: Yes, so we can bring that out when Luke is talking to her; she can say that her mother died when “I was two years old.”

Excerpted from THE MAKING OF STAR WARS: RETURN OF THE JEDI by J.W. Rinzler. Copyright © 2013 by Lucasfilm Ltd. Excerpted by permission of Del Rey/LucasBooks, a division of Random House, Inc. All rights reserved. No part of this excerpt may be reproduced or reprinted without permission in writing from the publisher.

Tinder To Roll Out New Safety Features, Including Panic Button

Canada’s Fastest Growing Jobs In 2020, According To Indeed