Chris Boyd has told the story about how he and a friend probably started the ugly Christmas sweater trend so many times over the last decade that he only recently realized he got the date wrong.

“In past articles I said it was in 2001 because I couldn’t do the math correctly in my mind,” he told HuffPost Canada over the phone, from his home in Vancouver. “I realized it’s actually 2002.”

But it turns out 2002 was the year that Boyd and some friends held a sweater party at their buddy Scott’s house — it wasn’t until two years later that they held a party that was open to the public, at the on-campus pub at Simon Fraser University in Burnaby, B.C.

Watch: Your choice of ugly Christmas sweater says a lot about you. Story continues after video.

Winter and Christmas-themed clothing started being mass-produced in the 1950s, when the post-war commercialization of the holiday really took off. It was also a time of renewed interest in outdoor sports, according to clothing brand Heddels, so the kind of big knits you might wear on a ski hill were all the rage.

But it wasn’t until a few decades later that they really got big. “Jingle Bell Sweaters,” as they were known, started being mass-produced in the ’80s. “Fashion snobs look down their noses at them,” creative director of Doneger Group consulting firm David Wolfe told the Wall Street Journal, but they’ve sold fairly reliably ever since.

In the 1989 comedy “National Lampoon’s Christmas Vacation,” there’s a forced joviality to the patterned knit worn by the dementedly Christmas-focused Clark Griswold. A decade later, a more exaggerated version of the sweater had fully cemented its pop culture spot as dorky and unappealing in “Bridget Jones’ Diary,” from 2001. The titular protagonist is optimistic when she spots a tall man with gorgeous hair, only for him to turn around, revealing the reindeer on his turtleneck and dashing her hopes.

In the early 2000s, the sweaters were still out there out there — but were rarely seen on anyone but people who were already middle-aged in the ’80s incarnation. That was Boyd’s experience, at least — he was working at a retirement home in Greater Vancouver, and saw them worn frequently around the holiday season.

“I would say up to 60, 70, 80 per cent of the grandmothers [living in the retirement home] were wearing these sweaters,” he said. ”I would compliment them: ‘Wow, that’s an amazing sweater.’ In the back of my mind, I was thinking, ‘Wouldn’t it be kind of fun to track one of these down?’”

His friend Jordan Birch had an aunt Mary, who also had a penchant for those kind of overtly cheerful Christmas-y sweaters. Together, the two friends decided to host a party.

“We called [the sweaters] ‘ugly’ as in cheesy,” Boyd said. “They were of course anything but that — they make people smile with their creative and unique festive design.”

Another significant influence for the two of them comes courtesy of another Canadian: Jim Carrey. “We really love the movie ‘Dumb and Dumber,’ and there’s a scene in there where they’re wearing really tacky sweaters,” Boyd explained.

Their first ugly sweater party, at their friend’s house, was a wholesome event — they drank eggnog and sang Christmas carols and decorated a tree. “The goal was to have the most cheesy, most feel-good party imaginable,” Boyd said.

It was such a success that the next year, they migrated to the university pub, and when it sold out they moved it to a bigger bar, the now-closed Boone County in Coquitlam. The party eventually moved to the Commodore Ballroom in Vancouver, which went on to host Ugly Christmas Sweater parties for years.

He and some friends went to a thrift store, where he picked out a heavy wool knit sweater — “it probably weighed a couple pounds” — decorated with snowmen and snowflakes. He paired it with a “really terrible turtleneck” that featured “Christmas trees and snowmen and really terrible little images on it.”

The party was a success. “I remember thinking that night: ‘This could be something,’” he said. “And that’s rare, for a new holiday tradition to start.”

He and his friends Adam Paulson and Kevin Wool started documenting details about upcoming Christmas sweater parties and photos of a variety of sweaters on their blog, Ugly Christmas Sweater Party. People kept messaging them asking to buy sweaters, Miller said, so eventually the three of them just went to a thrift store with $60 and bought 60 sweaters. They sold out so quickly that they initially thought something was wrong with their site.

“We ended up, through the years, ordering them by the truckload,” Miller said. They grew quickly, and now sell all different kinds of Christmas sweaters, from genuine vintage to Jesus as a DJ. They currently have several licensing partnerships, such as with the NFL or the NHL.

In 2011, he and his friends wrote a book about the phenomenon, which they promoted on an episode of “The Tonight Show.”

He’s thrilled about the industry’s growth, he says. “There’s all these different flavours of them now. Where I work, we have one. At our family get together, everyone wears one now. There are pub crawls. Even at my kids’ schools, they do them.”

And every year, he said, it seems to be growing.

“I don’t think it’s slowing down.” 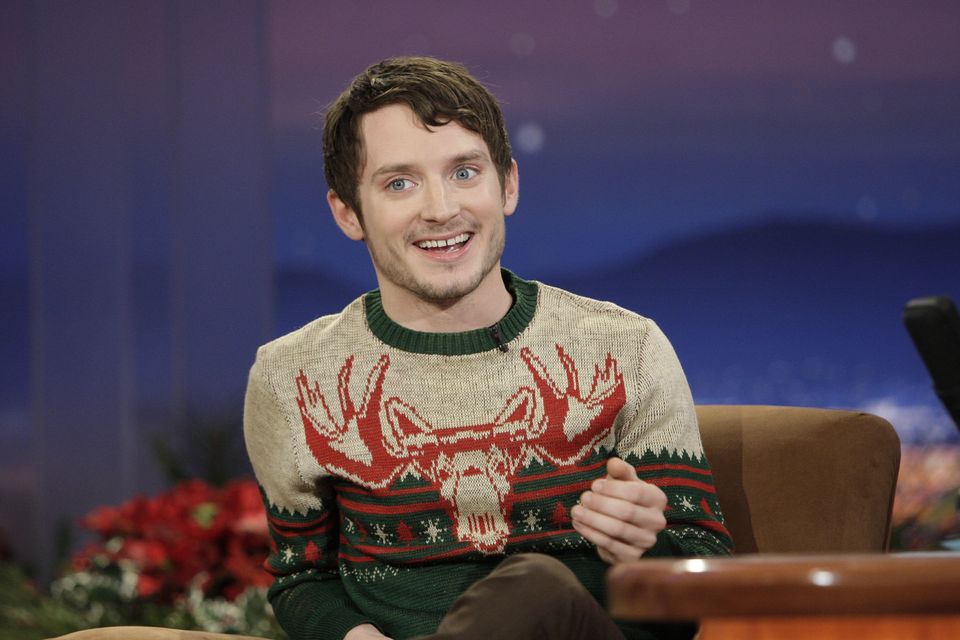 The sweaters were gaining popularity but still relatively underground in 2008, when Killington, Vt.-based stay-at-home-mom Anne Marie Blackman started preparing for her sons to go off to college. She was an experienced eBay user at that time, and was looking for things to sell online that might help her with costly university bills.

Today, optimizing search engine results in favour of your company is a major pillar of just about any online business. But back in 2008, it was still a relatively unknown practice. Blackman, though, was able to put her skills to work. She had a career in computer science before leaving to raise her kids, and was quickly able to figure out first a popular search term — “ugly Christmas sweater” — and then a way to get her entries to the top of eBay’s algorithm.

She bought up a number of colourful sweaters from thrift stores — some already Christmas-themed, but not all — and transformed them into thoroughly Christmas-y and thoroughly ugly sweaters.

“I’d see something and I’d say, ‘That would be fun on a sweater,’ and it would sell so quickly,” she told HuffPost Canada.

“The whole business was really fun for me,” Blackman said. “I’d add a macrame tree that used to be on the wall at somebody’s house — I had a lot of those, I bought them wherever I could find them,” she said.

The current sweaters, on sale all over the internet and in just about all major chain stores, are “not nearly as outrageous as they used to be,” Blackman said.

A design she was known for, and one she still recommends to anyone hoping to win an ugly Christmas sweater contest, is what she calls the “springy boobie” sweater. They were made by coiling Santa hats over the chest, and adding puffs and bells on the end.

In 2012, the coiled chest sweater was one of three of her designs featured on “The Ellen Show.” The next segment of the show featured an interview with Christina Aguilera, who told host Ellen DeGeneres that backstage, she was “trying to steal the Christmas sweaters with the boi-oi-oings.”

She also spotted gaps in the market, like sweaters for men and seasonal sweaters for people who don’t celebrate Christmas. Today, Hannukah sweaters are very much a thing, but Blackman was ahead of the curve when she made sweaters featuring “Happy Hannukah” lawn flags.

She snatched up the domain name My Ugly Christmas Sweater and started selling — first her own stuff, then other people’s. “I used to buy used Christmas sweaters in bulk, in hundred-pound bales,” she said. “I would buy 700 pounds at a time — that’s how much fit in my truck.”

For a while she manufactured her own sweaters, but the rise of competitor sites like Festified (formerly Skedouche) and Tipsy Elves made the work harder. Now her website is an affiliate marketing site, meaning companies will pay her to link to their products.

The early 2010s is when the trend really started taking off. Now, competition is tight, between the many sites specializing in Christmas sweaters, the celebrities who have their own brands (Beyoncé, Whoopi Goldberg, 2 Chainz and his “Dabbing Santa”) and the mega-retailers like Walmart, The Bay, and H&M that sell their own ugly Christmas sweaters.

These sites are usually secretive about their success, but in 2016, Ugly Christmas Sweater — an entity separate from Miller’s, Boyd’s, or Blackman’s, which sells a number 2019-specific sweaters themed after the Popeyes chicken sandwich or stating “Epstein Didn’t Kill Himself” — told Fast Company that it had made $6.35 million the previous year.

The average person spends more than $1,400 a year on non-gift retail items during the holiday season, according to Deloitte’s 2019 consumer survey. Clothing and accessories are the highest-ranking category on that list, beating out food, toys, hobbies and electronics. And 39 per cent of shoppers are likely to buy clothing for themselves while they’re Christmas shopping for other people.

Clothing is also the most commonly-purchased holiday gift, with 55 per cent of shoppers planning to give clothes to somebody on their list.

There are now offshoots of the sweater, like Christmas suits or dresses. But it’s hard to imagine anything eclipsing the sweater, which holds the distinction of having its own national day on the third Friday of December.

The ugly Christmas sweater is hard to qualify, because it occupies a strange space at the intersection of earnest, wholesome enjoyment and jaded, ironic distance (with a significant dash of corporate capitalism thrown in for good measure).

But as one of its originators, and someone who uses the Canadian trademark on “Ugly Christmas sweaters” for purely charitable use, Boyd says he sees more genuine affection in the sweaters than any degree of mocking.

“We love good costume parties, dressing up, showing how much we love Christmas,” he said. “We’re suckers.”

Live Your Best, Tackiest, Coziest Life In These Hanukkah Sweaters

A Masterclass In Campy Holiday Fashion From The Most Festive Celebrities