When I was younger, my friends and I would nonchalantly joke about what type of plastic surgery we would get, if we could change anything about our bodies. At 15 years old, this innocent game of 'What would you rather...' held no real impact or meaning in our lives and was really just used to cure boredom or turn extremities into an absurd discourse. No one I knew at that time could actually afford cosmetic surgery, thank god, because nor had we even fully gone through puberty yet. Then we grew up.

I have never been one to care what people think of my body or self, but close friends of mine, most in their late 20s, have been juggling with this question of plastic surgery for the past few years. According to the American Society of Plastic Surgeons, the average age of women getting breast augmentations and other plastic surgery procedures are individuals between the ages of 25-35. We fit the mould.

Each and every country around the world has its own definition of beauty, and while I was living and working in South Korea, I discovered that was more evident than ever. In Korea, physical perfection is seen to enhance the quality of life so in turn, cosmetic surgery is almost as common as going to the hair salon! Although bringing in a picture of Jennifer Aniston's hair-do to your stylist and providing your surgeon with a picture of Kate Middleton's nose is a lot different, if you ask me.

I remember while teaching in Korea, some of my high school students would attend class wearing eye patches, an obvious indicator that they had recently undergone double eyelid surgery. This procedure helps create the "Caucasian crease" that many Asian women don't naturally have, resulting in a more westernized appearance.

What I found to be most shocking was when I stumbled upon a full length mirror displayed underground by Apgujeong subway station in Seoul which outlined the "ideal" woman's body. Each section of this silhouette was labelled with various measurements and there was a line of eager young women waiting to see how they measured up. This disturbing image I witnessed that day in Seoul only helped confirm South Korea's fixation with beauty and the pressures they face as a society. Quite a sad reality if you ask me.

Each country, due to its values, climate or celebrity culture produce various trends which tend to fit their own idea of beauty or 'perfection'. In North America, for example, double eyelid surgery would not be as common as it is in South Korea. While in Florida this past winter break, a friend of mine attended a consultation with Dr. Sergio Alvarez, a top cosmetic surgeon in Miami, and asked me to join her for this potentially life changing session. I'm still not sure how I feel about cosmetic surgery and thought this would be a good opportunity to support my friend while simultaneously gaining more knowledge on the controversial subject.

I asked Dr. Alvarez whether it's true that trends in culture are what create a demand for cosmetic surgery and wondered what the most common procedure in the country might be. He admits that trends are a huge part of their field but went on to say, "I like to separate out the marketing from the science, because the marketing is way ahead of the science."

He admitted that like most of the country the most common procedures seen in the Miami market are liposuction and breast augmentations. He explained, "But the demand for these procedures is partly due to the nice weather we seem to retain all year."

Throughout my stint in South Korea, I was able to travel around Asia and while in Thailand I learned that it costs a significant amount less to go under the knife then it does anywhere else in the world. With an abundance of beautiful bikini bodies on the beach and more 'lady boys' then I've ever interacted with before, this information wasn't hard to believe. A simple search on Google, however, will display some pretty gruesome horror stories and images of women travelling to get plastic surgery, only to have their implants cause infections or need changing a year or two later.

Dr. Garth Fisher, who has appeared on ABC's hit series Extreme Makeover, commented recently in the press, "Unsuccessful outcomes occur because consumers are not properly informed and educated. Often they have unrealistic expectations, have chosen the wrong surgeon, or have embarked on a process of change or physical alteration for the wrong reasons or for the lowest cost they can find." Dr. Lawrence Tong, a Toronto, Canada-based surgeon also cautions people saying, "I warn that one may risk losing life and limb when trying to have cosmetic surgery 'on the cheap'."

As far as I'm concerned, women have the right to do whatever they want to their bodies, but can never be too informed about what could be a life-changing procedure or perhaps a very expensive mistake. The truth is, whether we'd like to admit it or not, aesthetics do matter and have a profound effect on our successes in the world. No matter how much our standards of beauty vary from culture to culture they still exist and have shaped evolutionary preference for thousands of years. I just hope that the disturbing and seemingly impossible trends of beauty in countries like South Korea can be weakened and not seen as concretely embedded within a superficial culture.

So now, at 27 years old, if I was asked a 'what would you rather' question between a nose job or breast implants...I'd probably choose cake. 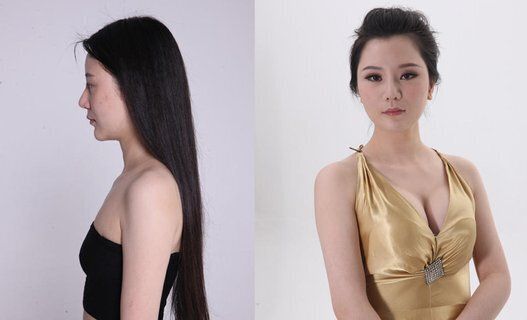