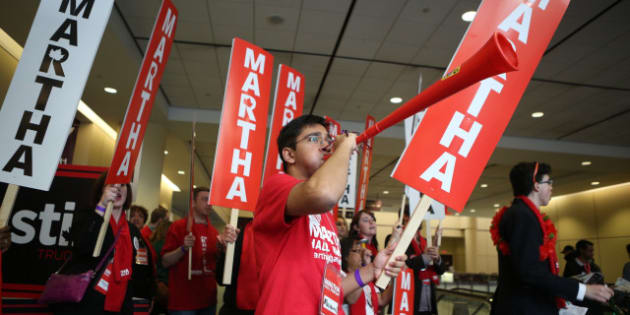 I didn't know what a "Liberal Party of Canada Leadership National Showcase" was then, and I don't know now -- despite having sat through a full three hours of it.

Like most Canadians, my previous experience with showcases was limited to the "showdown" variety seen on The Price is Right, the popular game show where poor people guess the price of furniture. Those showcases involved an announcer telling some random dude to come on down while a giddy audience shrieked with excited delight.

I mean, yeah, there was an audience, but it was mostly empty seats. Stories in the lead-up noted that Liberal organizers were having such a hard time getting people to come on down to their thing they had to start handing out tickets for free. The original price tag was between $150 and $499. I don't think many Price is Right people would have guessed that.

As the Liberals are picking their next boss with a needlessly protracted, week-long online voting fiesta, Saturday's showcase was really little more than the boring first half of a standard Canadian political party leadership convention gussied up with a sexier name. The six "candidates" who are technically "running" in this "election" all gave "pitches" and attempted to "close" a sale that hasn't been open for about seven months.

It's not fun being played, or being forced to indulge in other people's self-indulgent fantasies. So it's very hard to write about the speeches of Justin Trudeau's five hopeless opponents without feeling like a captive guest at a particularly bratty five-year-old's tea party. Mmm, yes, what a tasty mud pie.

Professor Coyne delivered a wonky lecture that reminded why wonks are rarely elected. Her agenda is one of old-fashioned lefty central planning repackaged as "national solutions," where the exercise of power by any authority other than Ottawa is a an ominous stray thread in the beautifully crocheted sweater of confederation.

Karen McCrimmon was awful awful awful. I could probably be a bit more nuanced, but if the passing of Roger Ebert has taught us nothing else, it's that life's too short for gentle words about terrible things.

Akwardly gesticulating in a white pantsuit as she nervously paced the stage, the former colonel looked like the world's saddest motivational speaker and sounded about the same, offering an incoherent ramble of feel-good bromides that made Sarah Palin look like Socrates. She also offered an unsettling window into the strange inner spirits that compelled her to this quixotic quest in the first place.

"My head said, 'are you crazy,' but my heart said 'you have to do this," she bragged. So if you want a candidate who doesn't trust her own brain, well, here you go.

Joyce Murray probably had the most to lose, and did. As the press's designed successor to the dearly departed Marc Garneau, hopes have been high that the former Gordon Campbell understudy could ride her ramshackle scheme for tri-party electoral cooperation to a respectable second-place, but her on-stage pitch landed with a thud. The idea may be strategically wise, but the weirdly defensive, overly apologetic way in which she presented it ("it's not a merger, it's not a coalition!") didn't exactly fill the crowd with confidence. Elections are rarely won under the slogan "it won't be as bad as you think."

Martha Hall Findlay, in fairness, was not bad. Unlike her competitors, she actually offered an explanation for her party's steady stream of losses that wasn't just a lazy call for "improved

communication" ("Canadians have lost sense of what we stand for and what we offer" -- Coyne), a Murray-style blame-the-system whine, or a condescending dismissal of Tory talents (many made much of the fact that Stephen Harper "plays Canadians against each other," as if elections had ever been won any other way).

Look, said Martha, the fact is, Harper "focused on the economy, he proposed clear and specific plans" and made a pitch that "resonated with Canadians." Walking her audience through an imaginary series of coast-to-cast door-knockings, she recited a sequence of reasonably plausible counter-pitches Liberals could make to win back lost voters. She then quipped that in her experience, "the really grumpy people are always Conservatives." So close.

Martin Cauchon, the long forgotten Chretien-era cabinet minister, gave a speech as archaic and quaint as the candidate himself. Since one imagines he'll be battling with Colonel McCrimmon for last place, it's probably only worth noting that his self-promotion included not one, but two applause-bait lines about his opposition to the American invasion of Iraq. It would have made for a more winning pitch in 2003, which was coincidentally the last time he held political office.

The man of the evening was obviously Justin. Though the CBC commentators insisted this will likely be "one of the most important speeches of his career," in reality, I imagine time will probably forget it just as quickly as the pointless event in which it was said.

Perfunctory and safe, his only rhetorical novelties were a couple attempted smackdowns of a few anti-Justin tropes, one sassy (expressing classist outrage at critics of his modest career, he snarled "this is one teacher who fully intends to fight back!"), the other sloppy (embracing his identity as his father's son, he encouraged pride for "all of our parents and the legacy they left us" -- a statement which may not play particularly well with his underemployed, debt-straddled youth base).

In all, the Liberal showcase actually showed the world very little, beyond the party's ongoing inability to bring interest to its internal affairs, clarity to its beliefs, or talent to its ranks. If you're going to have spectacle you better have substance, but the Lib's lack of the latter in favor of the former has resulted in a consistently cringeworthy contest that's short on grassroots but high on game show.