The loneliest place to be in a race is at the start line. We've all been there, silent and still, standing in a corral with hundreds of strangers -- strangers who miles later would be comrades, who by the time you finished your 26.2 miles would be a brother or sister. I remember the first time I ran a road race, an early April day like today, many years ago. Somewhere in the power of the crowds, the surging mentality, I had finally found a place where I felt I belonged. That first race, I weaved, bobbed, drafted behind a faster runner and, finally, raced.

Racing brought out the best of the runner in me. In it I found the childlike strides that we all strive to regain, somewhat close to graceful (by our own mind's eye). Racing let me share that pain and somehow, the movement of fellow runners somehow made the effort almost easy.

So in the dozens and dozens and dozens of races since, I've always cherished the start corral. My routine is set. A sip of water, a tug of the cap, feeling the gels on my pack, loosening the throwaway sweater. Composing a game face. And even as we get to the final minutes before a race, you could almost hear the silence. Thousands of people could be that silent? Could I really be so alone?

Yes we are social creatures and though the growth of the sport has sprouted running clubs and Sunday run groups, there is a reason why they talk about the loneliness of a long-distance runner. We may share the misery, but those roads we run, the miles we log, the calories we watch and the times we hit the start button on our Garmins are individual acts. So is actually putting a foot in front of the other.

While on most days of the year I train alone, suffer by myself, push myself to do an early run, it's the power of the crowd -- the need to have a shared experience -- that keeps me slogging through the winters or hold a running streak. Those are all internal struggles looking to be expressed on a race day months later with the crowd.

But we are not really alone.

Marathoners have a shared experience because not many other people go through the training and work that goes into long-distance running. When I say to myself that runners are my kind of people, I'm not just talking about a type of person who can geek it out about Garmins, tempos, race schedules or trackwork. I'm talking about people who work hard, love physical fitness, are supportive of each other, and find it more easy to give than to get back. In some ways, I just can't explain it other than to say I've never really met a runner I wouldn't want to go on a 5K run with, or share stories over a few pints.

Even us crazy runners are not alone.

A few years ago, in a bar a few hours after a friend and I had done Boston, we sat with our significant others. While we tried to regale ourselves with stories about the bus ride to Hopkinton, the wait at the village and the ensuing three to four hours of racing, we got nothing but eyerolls. Our better halves had endured a marathon -- a marathon of waiting by Hereford and Boylston, jockeying for position so they can be curbside, so when myself or a runner passed by for a mere few seconds, they could wave at us and scream "Go Kenny!" or "You're Almost Done! Woo hoo!"

And they're right. Any spouse or supporter of a runner knows what it means. Short Saturday nights, early Sunday mornings, 'taper' weeks where certain foods were forbidden and others gorged. This is not to mention the piles of running clothes that accumulate or vacation schedules squished between race seasons.

On race day, runners and their biggest fans, those loved ones, friends, supporters of our sport, turn stretches of road into something special. That race course -- First Ave in NYC, the Mall in DC, Wellesley -- is transformed into something so special they have nicknames like the "Scream Tunnel" or "Citgo Sign."

This is my long way of saying that on race day, that course, filled with my people, lined by our family, makes a race, be it Boston, Chicago, Toronto, MCM, my house. And I think that's what I feel about yesterday. Those attacks hit in a way I'm still trying to figure out how to process.

Yesterday, our house was attacked. Our friends and our family. Our fellow racers -- no, runners. And that's why I think it hurts.

Boston's shirts are loud. In the two times I've run it I've gobbled up a tonne of gear -- my weakness. But after the race, I tuck away the bright blues and greens and go for a muted black windbreaker with a smaller Boston logo. The logo is small, yellow, and just big enough that a fellow runner can see it within 10 paces. Just enough time to nod if it was called for.

Last night, I read about the #blueforboston movement, a call for runners to proudly wear Boston blue and yellow. I thought about it, and didn't hesitate. I dug through the gear and took out the brightest blue, the loudest yellow.

Today, I proudly wore my Boston colours. This Sunday, I signed up for a 10K where I will do the same. And just a few hours ago, at the Peace Run for Boston in Queen's Park, I and others gathered in our gear, in the perfect spring air. We stood there, silent for 60 seconds, where a crowd of 100 could be as loud as none, before we all set out on a run for Boston.

Kenny Yum is the managing editor of HuffPost Canada and a 22-time marathon runner. He blogs on running at A Whole Lot Of Soles. 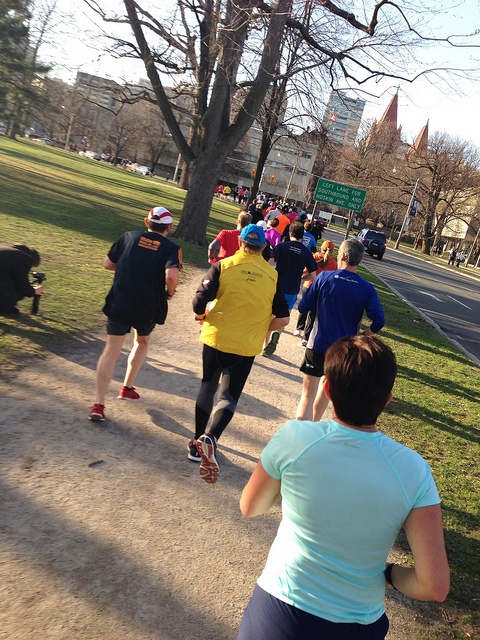