Desmond Morris, the famous British zoologist who wrote The Naked Ape, put together a six-part BBC series called The Human Animal: A Personal View of the Human Species during the mid-1990s, in an attempt to examine and explain human behaviour.

In the series, he explores humans as "hunting apes", looks at our body language, genetics, and tackles the differences of the sexes. During part 6, Beyond Survival, Dr. Morris, the brilliant zoologist who has moved the study of body language further ahead than anyone else in history, says, "Every time we go out in public, we're making complex statements about ourselves". Dr. Morris is absolutely right, but his statement reeks of irony because he talks about complex visual statements while wearing a wicked comb-over.

Comb-overs, a ridiculous "style" that balding men create to cover their baldness was extremely popular during the 1970s. The comb-over was so big that it was actually patented in 1977, the brain-child of skin-headed father and son team, Donald and Frank Smith. Below is the U.S. patent. Click here to read the details about the Smith's "invention".

Instructions from the Smiths for the correct way of covering your bald spot by "cross-hatching" three sections of longer hair and combing them over one another:

To begin with the subject's hair must be allowed to grow long enough to cover the bald area, generally about 3 to 4 inches. Of course, the length of the hair will depend on the size of the bald area, for example, a person who is front to back bald will require more length than a person with a bald spot either in front or in back of the head. In addition, the particular hair style to be performed will dictate the required hair length.

Can you imagine losing your hair and thinking that the best thing to do is to grow sections of your existing hair quite long, strategically comb it up to cover over your bald head, then paste it to your scalp or on top of existing strands with some sort of adhesive (probably hair spray) in an attempt to fool others into thinking that you still have your full head of hair? Only the wind could betray your clever ruse! It's genius!

Clumsy, fragile comb-overs are an attempt to camouflage or hide something; they may even induce suspicion. It was no surprise to hear Jason Kearns of Toronto's Kearns & Co. hair salon say that men who do comb-overs have no sense of self and are probably clinging to their youth. "Wearing a comb-over is like sweeping your baldness under the rug," he says, "it's still there."

Kearns began his professional life in the late '60s in swinging London, when hair, and everything else, was all about fun and free expression. He watched the music stars of the time mature and change -- some of their hair left the building before they did, and grace didn't necessarily follow.

He says of an aging rock star like Robert Plant, "If the hair is long and you've got all of it, wear it." Guys like David Crosby or Max Webster-era Kim Mitchell who have lost it all on top but keep the bottom long? "Cut it."

Monstrosities like the comb-over are born from the fear and anxiety of hair loss in our culture and the negative associations with it. This appears to reach back to the biblical story of Samson who was given superhuman strength by God, his hair the secret of his strength. When Delilah cut his hair off, Samson was rendered weak and powerless. Through this sustained association, we unwittingly create leagues of men with a Samson complex, the fear that their virility will wash down the drain with the strands that fall from their head.

This, plus the association with youth and the loss thereof, can be to some, a blow to masculine identity. But this is a choice, gentlemen.

Perhaps it was the unforgettable Yul Brynner who made bald okay for the first time in the 20th century. He shaved his head for his role as the King of Siam in the 1956 Academy Award-winning film, The King And I, and after the film's success, he continued to shave his head. Brynner wore wigs in some roles but the bald head was his trademark. While Brynner wasn't completely bald, he was balding. The hairline of the Russian-born actor receded and made him ordinary, but without hair, Brynner was handsome, swarthy, and striking.

As the 50s moved into the 60s and 70s, a fully bald head was still scary to people, but someone came up to the plate and made baldness sexy. Telly Savalas rocked the bald head in the early 1970s in his hit TV show, Kojak. Unlike Brynner, Savalas didn't shave his head for any particular role--his hair loss was well under way by the early 1960s, and completely gone ten years later. Again, Savalas has more presence as a bald man and was considered a sex symbol in his day.

So why did bald work for these two when so many other men at the time chose the comb-over? First, they're both actors, and they're already confident (I have read in my travels that actors and football players have the highest testosterone counts of all occupations). Second, once they took to the look, they "owned" their baldness and made it work for them. Third, they have good shaped heads that are in proportion to their bodies -- this is important.

Shaving one's head is definitely an alternative if a guy is losing his hair, but shaving your head bald isn't for everyone. Why? Proportion. I have a small head and I notice that when I put my hair into a tight ponytail, my head looks even smaller and I look out of proportion. Men with small heads who intend to shave their lids should take heed of this. Just because you're losing your hair doesn't mean that you have to shave right down to the wood, instead leave a 1/8″ or 1/4″ of stubble to break up the expanse of skin, and avoid large collars and scarves that can make your head look even smaller.

Probably the most important thing around hair loss is acceptance. Instead of an awkward attempt at hiding what is gone and in the past, embrace your hair loss and make the best of yourself. Jason Kearns says that baldness is a way for modern men to make their lives simple and to deal with hair loss with grace. He offers other alternatives to comb-overs and bald insecurity: "Instead of hiding your bare pate," he says, "try to work with it and add accessories like interesting eye glasses or a neatly trimmed beard."

Desmond Morris said that the key to a long life is calmness. If you want a happy and long life, it's best to relax about things you have no control over. This includes whether or not your hair will hold out. Don your look with grace, avoid the comb-over, and for goodness' sake, have a sense of humour about it; it's not the end of the world. 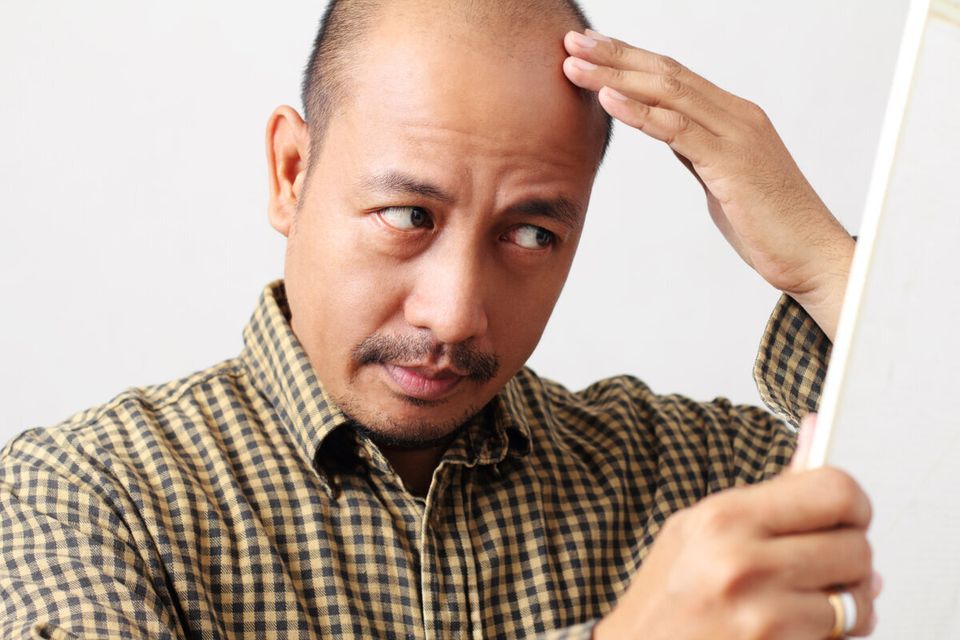 Recommended reading: Inside the Mind of a Man With a Comb-Over.