Recently, Canada's Parliament introduced the Extractive Sector Transparency Measures Act, which could have a huge impact on people around the world experiencing the "resource curse."

More than 60 per cent of the world's poorest people live in countries rich in natural resources -- but they rarely share in the wealth. Too often, poor communities have no say in the extraction of resources from their land and receive little information about the scope of these projects, the revenues they generate, their timelines and potential impacts.

The legislation would increase transparency in the oil, gas and mining industry by requiring Canadian companies to disclose the payments they make to governments for the extraction of natural resources. The legislation, part of the omnibus bill introduced last month, is an important first step to helping citizens of resource-rich countries increase accountability and fight corruption.

The finalized legislation needs to align with global transparency standards already in place around the world, including in the European Union and the U.S., which require company by company, country by country, public, project-level disclosure. Publish What You Pay Canada, of which Oxfam is a member, has proposed amendments to the law that would bring it into line with these standards. At the moment, the act has critical gaps that must be filled to make it effective and to deter corruption. 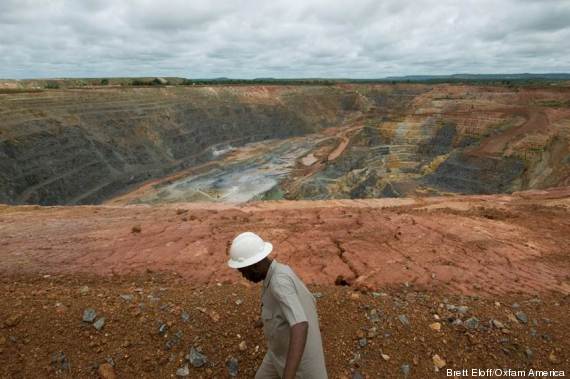 The pit at Sadiola Hill Gold Mine, western Mali.

Project level reporting is critical for these goals: communities must know how much each company is paying their governments for each mining, oil or gas project so they can manage expectations and hold their governments to account for the responsible management of those scarce resources. Project-level disclosure is also essential for fighting corruption by ensuring no money is siphoned off by corruption at some point in the process.

The Canadian government has publicly indicated that it supports this level of transparency, which is encouraging. The Canadian mining industry has been a partner with civil society on this work. In January, the Canadian mining industry, led by the Mining Association of Canada (MAC) and the Prospectors and Developers Association of Canada (PDAC), released recommendations for the government that endorsed strong transparency rules -- including requirements for project-by-project disclosure.

Transparency laws have been passed and are being implemented in Europe, Norway, and the U.S. This month, the U.K. introduced regulations into parliament to implement EU payment disclosure requirements ahead of schedule. Several other countries have also committed to finishing the EU laws quickly, including France, Germany and Sweden. By mid-2015, all 28 EU member states will have implemented these rules.

Oxfam, the global Publish What You Pay coalition, investors and citizens have clearly demonstrated that public, project-level reporting is absolutely essential for these laws to be effective. In 2013, investors with $5.8 trillion in assets wrote to the Canadian government and endorsed consistency with the U.S. and EU standards, saying this type of transparency would improve the overall quality of the business climate in resource-rich countries.

The Canadian government has an historic opportunity to make a low-cost contribution to fighting corruption and improving the lives of thousands of communities around the world.

Canada's extractive industry has impressive reach. In 2013, over 50 per cent of the world's publicly listed exploration and mining companies were headquartered in Canada with interests in more than 100 countries around the world, according to the Canadian government. The potential reach of the government's commitment to transparency and fighting corruption is equally impressive.

A Quebec River Has Been Granted Rights And Legal 'Personhood'