Canadian political leaders showed a united front Monday by speaking out against the scourge of anti-Black racism, while reminding Canadians that it is not just an issue for Americans to confront.

Prime Minister Justin Trudeau, Conservative Leader Andrew Scheer, and NDP Leader Jagmeet Singh all spoke to reporters about the protests that have erupted in the United States, Canada, and Europe after last week’s police killing of George Floyd, a 46-year-old Black man, in Minneapolis.

Bystander video showed Floyd pinned to the ground with a white officer’s knee on his neck for eight minutes. Floyd repeatedly said he could not breathe. The officer, Derek Chauvin, has been fired and charged with third-degree murder and manslaughter. Three other officers, who were present during the incident but did not intervene, have also been fired from the police department.

Demonstrations in many major U.S. cities turned violent over the weekend, with concerns raised about aggressive police tactics, including firing rubber bullets, tear gas, and pepper spray on protesters and journalists alike.

In Montreal, 11 people were arrested after a rally against anti-Black racism Sunday when some protesters lit fires, smashed windows, and clashed with police. A day earlier, thousands took to the streets for a peaceful protest in Toronto against anti-Black and anti-Indigenous racism. They also demanded answers in the death of Regis Korchinski-Paquet, a Black woman who fell from an apartment balcony in the presence of Toronto police officers last week.

At his daily briefing outside his Ottawa residence, Trudeau said Monday that “as a country, we can’t pretend racism doesn’t exist here.” Anti-Black racism, systemic discrimination, and unconscious bias are all real aspects of Canadian life, he said.

PM asked about his blackface incidents

Trudeau said the thousands of Canadians who joined peaceful protests and denounced those who would try to “derail” the demonstrations sent a clear message they will not tolerate injustice.

“To young Black Canadians, I hear you when you say you are anxious and angry, when you say that this brings back painful experiences of racism that you’ve faced. I want you to know that I’m listening and that your government will always stand with you,” Trudeau said. “Together we will keep taking meaningful action to fight racism and discrimination, in every form.”

The “status quo” of people facing violence because of their skin colour is unacceptable, he said, and no parent should have to explain to their children that they could face racism. “It is time — it is past time — for this to change,” he said, echoing similar sentiments he expressed Friday.

The prime minister was also pressed on his own incidents of racism, most notably his past use of brownface and blackface that surfaced during the fall federal election campaign. Asked if he felt his past use of racist makeup diminished his moral leadership on the issue, Trudeau said everyone has a role to play.

“But at the same time, we need to focus on doing better every single day, regardless of what we did or haven’t done in our past.”

The prime minister also said he would continue to work with the provinces on a strategy for the collection of race-based data on how the COVID-19 pandemic is specifically affecting racialized communities.

At an earlier press conference in Ottawa, Scheer said he was “heartbroken” over Floyd’s killing.

“No one should ever feel unsafe around police officers who must uphold the law for all, or feel unsafe because of the colour of their skin,” he said. “We all have a responsibility to fight anti-Black racism and all forms of brutality or injustice in Canada or everywhere.”

A reporter noted the Tory leader’s use of the term “radical activists” in February to describe people who participated in blockades in solidarity with Wet’suwet’en hereditary chiefs fighting a pipeline project on their traditional B.C. territory. Scheer had said at the time that many participating in protests had “no connection” to the Wet’suwet’en people.

Scheer was asked what he thought about protesters “this time,” given that many of the protesters against anti-Black racism are white. The Tory leader said he supports the right of people to peacefully express their views and speak out injustices.

“I believe that when you’re looking at a tragic incident where a man was killed in police custody, and with all the context around the discrimination many Black people feel in the United States and indeed around the world, that all levels of government have much more to do to eliminate that... type of racism,” Scheer said.

Asked how white people can be better allies, Scheer said racist acts should be called out and “the next generation of Canadians” should be taught how their words can hurt and lead to violence.

“I believe every single Canadian, every single… human being has a right to live their life without fear of the authorities just because of the colour of their skin or their ethnic background,” he said.

NDP Leader Jagmeet Singh, the first person of colour to lead a major federal party in Canada, also spoke with reporters in Ottawa about Floyd’s killing, saying the chilling images in that video can’t be forgotten.

“It was painful, it was stomach-churning,” he said. “The casual violence, the callousness that it took to take someone’s life in that way.”

Singh, who has been open about the racism he has faced as a Sikh, stressed the need to channel anger and pain into organizing and mobilizing for a better country. He lauded the thousands of protesters who took to the streets in Toronto.

“While we look to the States, this is not just an American issue. Here in Canada we face anti-Black racism, as well,” he said. “Black people have died at the hands of police.”

The NDP leader called for policing reforms, including more training on de-escalation and an end to discriminatory practices that erode public trust, such as police carding.

“I’m not someone who calls for peace. I believe we must call for justice,” he said. “Justice is the only path towards creating a better world.” 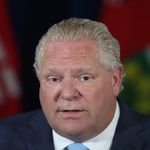